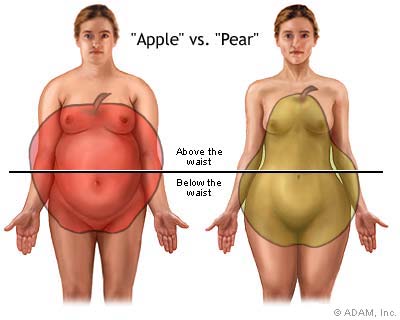 A pear-shaped build is “healthier” then an apple build. This is because extra pounds and fat in a pear shape are below the waist, or lower body/thigh area, versus above the waist and around your midsection in an apple shape. The idea behind this is that weight above the waist adds additional and unnecessary stress, inflammation, and padding around your internal organs.

An increased amount of abdominal fat has been linked to several health complications (diabetes, heart disease, and stroke). A recent study conducted added early death to the list of complications. European researchers followed about 360,000 participants for about 10 years in a large ongoing study called thee Prospective Investigation into Cancer and Nutrition (EPIC) health study. During the follow-up period, 14,723 of the participants died. After researchers adjusted for overweight and obesity, measured by body mass index (BMI), waist circumference and waist-to-hip measurements, the found both independently associated with an increased risk for early death. This study was able to conclude that even those individuals, even with a normal BMI, that had excess stomach fat had about double the risk of dying prematurely as people with the least amount of belly fat. This death risk increased with waist circumference, whether the participants were overweight or not. Specifically, the study concluded that : How do you tell if you have too much abdominal fat?

One Response to Extra Belly Fat Linked to Early Death