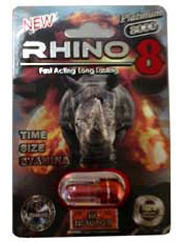 Rhino 8 is a male sexual performance supplement that is designed to be taken directly before intercourse. Its advertising promises their users increased erection size, improved physical stamina, and an end to premature ejaculation. Their product is formulated to start working within minutes and to then last all night, with some users saying that they have still felt the effects 2-3 days later.

Our team of men’s health and sexuality experts believe that the best product for male enhancement is Viritenz. Their blend has been shown to be as effective as some of the leading ED medications, or even more so depending on any given user’s specific sexual needs. Click here to learn more about the different benefits that Viritenz offers its users.

Do You Know the Best Male Enhancement Supplements of 2021?

Rhino 8 Ingredients and Side Effects

Go Ji Extract: A type of berry originally found in China that has recently become a fad “superfood,” despite the fact that there is very little scientific information about what they actually do for the body in either the short- or the long-term.

In Chinese herbology go ji berries, more commonly seen as “goji” in America, are used to promote longevity. One ancient legend claimed that there was an herbalist that lived for 252 years on goji berry tonic alone. It should be noted that this legend is in no way substantiated by credible documentation or medical data of any kind.

It is more believable that goji berries lower blood pressure and blood sugar levels, which could then potentially make it easier for users to get and maintain erections. There is very little medical data that supports this, so all sexual benefits linked to goji berries are purely speculative at this time.

Side effects of consuming goji berries or goji-based products may include: Dang Gui: A Chinese herb that is used to treat menopausal symptoms in women and premature ejaculation in men. It has also been included in the treatments for a number of other conditions, however all other applications of dang gui beyond the two mentioned are purely hypothetical.

Dang gui, also called Chinese angelica, has shown that when it is applied directly to the head of the penis with a combination of other herbs that it can help prevent men from reaching orgasm too quickly. There is very little information about whether or not it is as effective when it is ingested as when it is applied topically.

Dang qui, also sometimes anglicized as Dong quai, is associated with some unique but serious side effects. It is possible that taking dang qui can make the skin highly sensitive to light, especially for light-skinned individuals.

Unfortunately, this also makes consumers more likely to contract skin cancer. Additionally, there are other carcinogenic compounds in dang gui, making it far too dangerous for our team to recommend, especially considering how ineffective it is for male enhancement.

Atractylodes: A plant often used for treating gastro-intestinal distress like nausea and diarrhea, that may have some anti-inflammatory qualities as well. It is unlikely that atractylodes will have any kind of sexual benefit for its users, however it has been linked to some potential side effects. Taking atractylodes could possibly lead to:

Cornus: A form of plant known as the American dogwood. Cornus had historically been used as a treatment for malaria, however quinine has far overtaken it in this regard.

There are no known sexual benefits associated with dogwood usage. It is not known if cornus is safe for long term use or not. Click here for our experts’ recommendations of the top male enhancement product on the market.

EDITOR’S TIP:Combine this supplement with a proven male enhancement pill such as Viritenz for better results. Rhino 8 has a very strange ingredients blend for a male enhancement product. It does not contain L-Arginine, maca, or any of the more common herbs that are known to be effective for men’s sexual health and wellness, and instead rely on ancient Chinese herbs that have no known sexual benefits.

The only one of Rhino 8’s ingredients that has any kind of history of male enhancement is goji berries, and even that is not well documented. In general, these herbs are used to treat totally unrelated conditions. It seems highly unlikely that Rhino 8 could be successful for all but the most mild cases of erectile dysfunction.

Our panel also tend to favor daily male enhancement supplements instead of single use products. Single use supplements have a more immediate, dramatic effect on the body, making it more likely that users may experience side effects in the moment.

Additionally, taking a daily supplement allows the user to be more responsive to situations as they arrive as opposed to having to schedule and plan every encounter. One time use products are more of a gamble and have a higher failure rate than daily products that improve the way the body works overall.

Follow this link to find male enhancement products that are formulated to improve your specific weakness areas.

The Price and Quality of Rhino 8

Rhino 8 is an as-needed pill that is designed to be taken before sexual intercourse. It is sold through their website at prices similar to these:

This is far more expensive than most male enhancement supplements, even similar one-time use pills. Daily supplements will always tend to be a more cost-effective option than one-time-use pills, especially for regularly sexually active people.

Even most single-use products, however, rarely exceed much over $5 per pill. At over $8 per pill, even when buying in quantity, Rhino 8 will become too expensive for many of its would-be users. To see data about how the top brands of male enhancement products perform when the pressure is on, follow this link.

Rhino 8 is a product of BioZEN Inc., manufacturers of sexual enhancement products for both sexes. They list their contact information as:

Email: BioZEN does not publish their email address for public use, however they do have an electronic customer comment form that can be utilized for electronic communication.

It should be noted that BioZEN has been contacted by the Food and Drug Administration multiple times regarding the contents of their products. Recently they advised consumers not to purchase Rhino 8 specifically due to fears that it contains ingredients that are not listed on the label.

A separate letter from the FDA warned consumers that many of BioZEN’s products could be contaminated with controlled substances. Multiple different brands of products produced by BioZEN were mentioned in that letter, including Rhino 8.

To see how the top brands of male enhancement products compare when measured head to head, click here.

The online reviews of Rhino 8 are not particularly positive. Over half of their reviews on Amazon received only one star, the lowest possible rating on the site. Other customer reviews were similar to these:

“I took one when things were heating up and immediately started getting shaky and sweaty. I had to cancel the date entirely after the diarrhea started.”

“My boyfriend had been having some trouble down there, so for my birthday I made him take a Rhino. Not only did it not work where it was supposed to, but he started getting sick and went home. Happy birthday to me.”

The most frequent complaint from previous users is that it did not give them the benefits that their advertising promised. There were also quite a few reports of users experiencing unpleasant side effects. Many of these were not consistent with the listed ingredients of Rhino 8, but were consistent with the controlled substances that they are accused of including.

Follow this link to learn more about which brands of male enhancement products are the most effective for increasing erectile durability, click here.

How Does Rhino 8 Compare?

The best male enhancement products that are those that are effective at getting their promised results but that do not compromise the overall health of the user. It is important that manufacturers are honest with their consumers about what is in their products and that consumers are put in apposition to be able to accurately choose what will be the best product for them.

By all of these accounts, Rhino 8 is a failure as a male enhancement product. The responses from their former customers have shown that Rhino 8 has not demonstrated either safety or reliability, and the FDA’s investigation into their products has shown that their company uses untrustworthy methods of production and does not communicate honestly with their clientele.

Our team recommends the over the counter male enhancement product Viritenz to our readers. It is designed for anyone that is looking for help with better erections, improved libido, or increased seminal output on a regular basis.

Viritenz is a daily supplement that helps users stay ready for the big moment whenever it should arise. They use a blend of maca root, tongkat ali, L-Arginine, and other top additives that has been proven to be effective for the vast majority of users. Click here to see how Viritenz can benefit men’s bodies.