Cerefolin NAC Review (UPDATED 2020): Don't Buy Before You Read This! 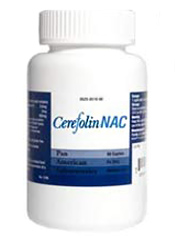 Cerefolin NAC is a prescription mental performance aid that is designed to help users improve their memory function and fight against the effects of cognitive decline. It is designed to help prevent and reverse the damage to the brain that is caused by oxidation and other environmental factors.

It is approved to treat elderly patients, people that have experienced certain types of brain trauma, and other individuals that have seen a rapid decrease in their mental abilities. It can help increase neurological function and cellular activity, and may also be useful for fighting the effects of depression and anxiety.

The nootropic supplement that is considered the most broadly useful is Memotenz. It is approved to help users with a variety of different mental performance needs and goals, including faster and more accurate thinking and easier information storage and recall. Click here to read our experts’ complete write-up of Memotenz.

Cerefolin NAC Ingredients and Side Effects L-Methylfolate: A form of vitamin B9 that is more biologically active than regular folate, folic acid, or D-methylfolate. L-methylfolate is used by the body for a number of integral bodily processes, including methylation, cardiovascular health, and preventing oxidation and damage to our DNA.

Folate is most known for its beneficial effects during pregnancy. It is a key factor in proper fetal development, and folate deficiencies can be responsible for birth defects, low birth weights, and miscarriages.

L-methylfolate is considered the most effective form of vitamin B9, given that it is the most biologically processed form that can be ingested. Folate and folic acid both have to be converted into L-methylfolate before they can be used by the body.

Ingesting L-methylfolate requires less energy from the body to process, and it is especially beneficial to people that lack the enzyme required to activate that conversion. Many people have a genetic mutation that prevents them from manufacturing that enzyme on their own, making it hard to ever have enough L-Methylfolate for optimal biological functionality.

L-Methylfolate is not known as a direct nootropic booster, however it is thought to have some neuroprotective function. It is an antioxidant and anti-inflammatory agent that can help fight off the damage that comes with aging and environmental toxins.

It is highly unlikely that any users will notice a direct benefit to their cognitive performance by taking L-methylfolate. It is generally considered safe for most humans, however it can potentially lead to side effects in some more sensitive individuals including:

N-Acetylcysteine: An amino acid often abbreviated as NAC that is most frequently used to help break up phlegm and mucus in the lungs. NAC has shown some other medical applications as well, and may be useful in the treatment of acetaminophen poisoning and influenza.

As a nootropic, its usefulness is limited. NAC may help stimulate glutaminergic and dopaminergic neurotransmissions, and it may help the brain deal with anxiety, stress, and irritability.

It has not been shown to help with any of the traditional measures of a nootropic drug like memory function and learning, thinking speed and accuracy, or focus and attention span. It may also be an antioxidant that can help prevent the damaging effects of the oxidation of the brain, however users should not expect to see any kind of immediate or measurable improvement in mental performance.

It is well-tolerated in most people, however NAC has shown the potential to cause:

Methylcobalamin: A form of vitamin B12 that is more stable and bioactive than cyanocobalamin, the more common form of the chemical. B12 is used by the body for DNA synthesis, methyl donation, and is used to help convert food products into energy.

B12 has also been shown to be useful for preventing the damage that oxidation can cause to the brain, and is also helpful for treating depression and the damage to the brain caused by stroke.

Methylcobalamin is mostly considered safe and healthy for the vast majority of users, however there are some concerns related to overuse. Chronic B12 over-ingestion is thought to potentially increase the risks of users developing certain forms of leukemia, polycythemia vera, and hypereosinophilic syndrome. Cerefolin NAC has an ingredients blend that may be useful for some purposes but should not be considered a proper nootropic supplement. It is highly unlikely that anyone taking Cerefolin NAC will notice any kind of improvement in their mental performance.

The most notable exception to this would be people with brain damage or certain types of metabolic imbalances. It is possible that individuals that have experienced a decline in mental abilities due to the extreme effects of oxidation of the brain will notice an improvement in their thinking abilities, however these cases are rare.

In general, healthy, mentally fit individuals will see very little benefit from taking Cerefolin NAC. It has no applications as a short-term cognitive booster and should not be taken as a study or work performance aid.

If you feel like you are one of the people that could benefit from taking Cerefolin NAC, consult with your physician or health care provider. Do not take Cerefolin NAC without a doctor’s recommendation.

Follow this link to find out which nootropic will be the most beneficial for your specific needs and brain chemistry.

The Price and Quality of Cerefolin NAC

Cerefolin NAC is a prescription drug that cannot be purchased without the aid of a doctor. This fact alone makes Cerefolin NAC much more expensive than most daily supplements, however this also depends on the type of insurance coverage that users have.

Without insurance coverage, Cerefolin NAC will be cost prohibitive for many of its patients. While the cost will vary greatly depending on the doctor or pharmacy, users should expect to pay a price similar to this:

This is far more expensive than even the highest-priced over the counter nootropic supplements. This is only worth it for users that have seen extreme signs of cognitive degradation that is beyond the help of normal supplementation. To learn more about how to determine which nootropic aid is the best for you and your mental performance goals, click here.

Cerefolin NAC is produced by pharmaceuticals manufacturer Alfasigma USA, Inc. The contact information that they provide online is as follows:

Email: Alfasigma USA does not provide an email address, nor do they have an electronic comment for available for their users.

Users should note that before 2020 Alfasigma USA was known as Pamlab, Inc., a division of Nestlé Health Science.

For data about the best ways to boost your memory, cognition, and attention span, just follow this link.

Many people have found Cerefolin NAC to be useful for preventing further decline and restoring some lost cognitive function. Other individuals have had less positive experiences, including the former users that posted these comments:

“Caused an interaction with another drug that I am taking that led to a psychotic reaction. I just got out of county and I’m only now starting to put my life back together.”

“EXTREME itching and rash for two days, and this was after I spent 8-10 hours VOMITING in the bathroom. No fun.”

“I’m actually not sure if this helped or hurt, but all I know is that for the money I’m paying this stuff should be way better,”

The majority of the past users’ complaints centered on side effects that they experienced while taking Cerefolin NAC. The next most common issue was the price, followed by the difficulty in acquiring it.

Click here to see more reviews of the top nootropic supplements on the market today.

How Does Cerefolin NAC Compare?

Cerefolin NAC seems like it will be effective for helping a very specific subset of people, while being mostly ineffective for the majority of users that are looking for a nootropic boost.

Cerefolin NAC works best when taken by elderly individuals and people with certain conditions of the brain such as damage resulting from over-oxidation. Cerefolin NAC will not be right for most users looking for memory, cognition, thinking accuracy, or attention span aids.

It is not formulated to help otherwise healthy individuals perform better, but it may be useful if you have a certain kind of genetic mutation, if you’ve experienced physical trauma to the brain, or if you’ve recently seen a dramatic decline in your thinking abilities. Anyone else should seek alternate forms of supplementation.

The top-rated nootropic aid for healthy, functional adults is Memotenz. It has a track record of helping to raise the performance baseline for users of all ages and mental abilities.

Their ingredients blend is formulated to help improve mental functioning in a variety of categories including memory, thinking speed and accuracy, and problem solving skills. Click here to see a complete list of all of the contents that go into Memotenz.