Synagen IQ Review (UPDATED 2020): Don't Buy Before You Read This! 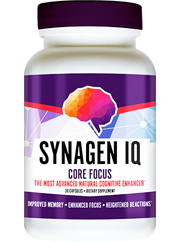 Synagen IQ is a nootropic supplement that is designed to boost mental performance. While actually increasing raw IQ is impossible, Synagen IQ’s advertisements claim that they can boost “effective IQ,” a metric that measures practical cognition.

Their promotional materials say that it can increase users’ ability to store and access information, as well as their alertness and mental stamina. They say that it provides both an instant boost for short-term tasks and that it helps delay the effects of aging on the brain.

The nootropic supplement that is considered the most effective by professionals within the industry is Memotenz. It has developed a reputation as the premier memory enhancement product that can be purchased without a doctor’s prescription. Click here to see everything that goes into Memotenz’s proprietary blend of ingredients.

Synagen IQ Ingredients and Side Effects

Caffeine: Globally, this is the most commonly consumed stimulant in the world. Caffeine is the main active agent that gives coffee, tea, cola, and hundreds of other foods, drinks and nutritional products their energy-boosting effects.

Caffeine is an effective nootropic in some senses and a very ineffective one in others. Caffeine gives the brain a very quick, but frustratingly short lived, jolt of energy that has been shown to help improve mental performance by a number of metrics.

While it is in effect, caffeine can help its consumers recall information more rapidly, solve problems easier, and remain alert and reactive past the point when fatigue usually sets in. It increases heart rate and blood flow to the brain, and it also can have slight euphoric or mood-altering effects. There are, however, a number of acute issues with caffeine consumption that limit its effectiveness in a nootropic supplement. For one, its effects are relatively short lived and are often followed by a “crash” period where energy and mental performance are diminished significantly.

For two, caffeine can lead to a number of possible side effects in users, some of them serious. The more caffeine someone consumes the more likely they are to experience side effects, which can possibly include:

Alpha-GPC: A choline precursor that occurs naturally but can also be found in red meats and organ tissue or synthesized in a lab based on egg or soy enzymes. Choline is an important chemical for proper neural function, however it is rarely needed in supplementary form.

L-alpha-glycerylphosphorylcholine, also often abbreviated as a-GPC, is thought to be helpful for preventing cognitive decline and may help reduce the effects of conditions like Alzheimer’s disease and dementia. It has not, however, shown any benefits for increasing cognition or memory in otherwise healthy adults.

Alpha-GPC is possibly valuable as a neuroprotectant that can be beneficial for decreasing the negative effects over time. It will not have an immediate “boosting” effect like caffeine does, however users will also not experience any kind of crash effect as well. It is highly unlikely that users will be able to notice a significant change in their mental functioning unless they have a significant choline deficiency.

Alpha-GPC is safe for most users, however it has been linked to some occasional side effects such as:

Bacopa Monnieri: An herb originally cultivated in India that is considered one of the more effective ingredients for nootropic supplements. It is called Brahmi in India or water hyssop in Europe and has been used for centuries in Ayurvedic medicine to treat a number of conditions including:

Its most pronounced effects are on the mental performance of its users, especially in terms of memory. Bacopa is excellent for the physiology of the brain, where it can actually help grow the dendrites that form the neural connections that happen during cognition.

Unlike a-GPC, bacopa monnieri has demonstrated its effects in people of all ages and cognition abilities, not just those that have deficiencies in certain chemicals. It is one of the most broadly applicable supplements and is particularly useful when taken regularly.

Click here to see how effective nootropic supplements can be for increasing test scores and job performance. Bacopa monnieri is one of the most recommended ingredients for any type of nootropic supplement. It impacts not just the temporary performance of the brain, but also its physiology and long-term health. It is considered one of the most effective memory enhancement herbs known to science.

Alpha-GPC is not an effective short-term nootropic supplement. It will not help users study, perform better at work, or give them energy to stay awake or complete tasks. It is potentially helpful in the very long run, and it is very useful for those individuals that have specific choline shortages.

Our team does not recommend any nootropic that still uses caffeine in its blend. We know too much now about just how ineffective caffeine is as a long-term supplement ingredient to be able to suggest it to our readers. Caffeine is most effective when used sparingly for short-term benefits in specific instances, not as an everyday drug taken regardless of situation.

Follow this link to find out the most effective nootropic products on the market for improving memory and cognitive performance.

The Price and Quality of Synagen IQ

Synagen IQ can be purchased though either their own web page or through independent online dealers, however it seems to be much cheaper through their site. This is important because even at its cheapest Synagen IQ is one of the more expensive nootropic products on the market. The prices that were being offered on their website at the date of this article’s publication are:

Synagen IQ does not have a very extensive ingredients list, nor are its ingredients particularly rare or expensive. This is no explanation given for why it would be so much more expensive than other products of this type. To learn more about how you can maximize your mental potential, just click here.

Potential customers should be aware that Synagen has an “F” rating with the Better Business Bureau and a 100% negative customer feedback rating. Many former customers have threatened legal action against Synagen, however there is no evidence that any of them have followed through on those threats.

For data about the best nootropic supplements for addressing your particular mental needs, follow this link.

The online reviews for Synagen IQ are not very flattering. They have received more one-star reviews on Amazon (the lowest possible rating) than all other ratings combined. These are some of the comments from previous Synagen IQ customers:

“RUN from this product. Super expensive but does absolutely NOTHING!”

“I had an upset stomach every morning I took these pills. Made me nervous and jittery all day. All that went away as soon as the Synagen IQ went in the garbage.”

“Be careful with this stuff. No benefits but it did give me headaches and I think it might have had a bad reaction with an anti-psychotic med that I’m on.”

Many reviews say that it does nothing, however a larger amount commented on how unpleasant the side effects were. Most frequently the issues were gastro-intestinal in nature, however they also mentioned headaches, insomnia, anxiety, and brain fog.

Click here for more information about the top nootropic supplements on the market today.

How Does Synagen IQ Compare?

Before reading the reviews of past customers it would be tempting to consider this another mediocre supplement that tries to use the short-term effects of caffeine to make their customers think that it is working better than it actually is. After reading the many reports from customers that have experienced unpleasant side effects our team now considers it a low-quality nootropic supplement that our readers are strongly encouraged to avoid.

Bacopa monnieri is an effective ingredient for supplements of this nature and is easily available as a part of other brands’ proprietary formulas. Caffeine is not a recommended ingredient in any nootropic supplement. It should be used only when necessary and not taken as part of a daily health regimen.

The nootropic supplement with the highest quality ingredients blend is Memotenz. It uses bacopa monnieri as well, however it pairs it with other more proven additives like ginkgo biloba and St. John’s wort.

Memotenz has shown facility for dramatically improving users’ memory, especially when taken regularly. Click here to learn more about why Memotenz is so effective for increasing mental performance.