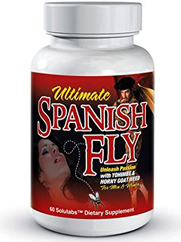 Ultimate Spanish Fly is a women’s libido supplement used to enhance overall sexual function. This has a blend of herbal extracts and amino acids which are all-natural.

Details are lacking since there is no official website, and only obvious claims are made to explain what it’s for.

The name uses the controversial banned Spanish Fly, but it does not appear to actually use it.

The top pick for women’s libido is Libitrinex. We have fully examined it and determined its high dosage strength can provide numerous benefits. Follow this link to review our Libitrinex review. This can also be taken for women looking to increase their libido. It can help improve overall circulation which can make it easier to stay aroused as blood gorges the genitals. This may also help prevent osteoporosis in women suffering from PMS symptoms.

Avena Sativa: This comes from the same plant that oatmeal is taken from, it has nutrients and is used to enhance libido.

L-Arginine: A powerful amino acid that is required for proper cardiovascular function. This is common to several types of foods and it is often added to aphrodisiac supplements for its ability to enhance blood flow. This improved circulation can make it easier to stay aroused as blood rushes to the genitals.

Guarana: These red seeds are used for their stimulant effects, and in the Amazon they are often taken to provide energy. It has caffeine and theobromine in it which affects the central nervous system, helping to boost circulation and overall alertness. Because it is a stimulant it’s not advised to take it late in the day where it can cause insomnia. Other potential side effects may include:

Yohimbe Bark: A stimulant tree bark that is native to certain parts of Africa. It can be used to help prevent erectile dysfunction and it is used for overall sexual function. While this can help in some way, there are many serious potential side effects which hare possible even in standard doses. This is why it’s advised to not mix it with other simulants and to avoid using it late in the day. Possible symptoms seen in users who take Yohimbe include:

Cordyceps: A unique fungus which has increased in popularity due to claims that it can boost immune function, enhance athletic function, and improve longevity. Actual scientific evidence to support its use is lacking, and it’s still unknown whether or not this can be relied upon. Most of the claims made about its effectiveness are only offered through companies that sell it.

Xanthoparmelia Scabrosa: A controversial ingredient which is made up of lichen, a combination of a fungus and algae. This is claimed to have aphrodisiac benefits and it is most often used for erectile dysfunction. Web MD has looked into it and they declare it as being possible:

This may lead to the death of cells which over time can be very damaging to overall health.

Solutab: The only available information about this is that it’s used in combination with a prescription drug. It’s unknown why this is added to a supplement. Some of the ingredients in this can be useful at supporting healthy libido in women. The issue is that the company that makes it only sells it through 3rd party websites, and it’s not known for certain if this is still being made fresh.

Later in the review we’ll go deeper into issues it has with a lack of reviews, poor company background, and the lack of a money back guarantee.

Overall because the formula is very basic and already sued in countless other brands, there is insufficient evidence given as to why this would be a preferable supplement. The risk factor is too high and there are serious questions which are yet to be answered. Until they publish more details, there is no reason to prefer this over other brands.

Follow our link to see what supplements were favored for their ability to enhance sexual function in women.

THE PRICE AND QUALITY OF ULTIMATE SPANISH FLY

Each bottle has a 30 day supply and they advise 2 pills a day. Much of the information about this brand is only known from reading the ingredients  by examining marketing claims made by 3rd party reviews.

It’s difficult to try and determine the quality when there is a complete lack of useful information. One website does publish the supplements facts list but its unknown if this is up to date and still used in the same amount. What is known is that potentially dangerous ingredients are added such as Yohimbe and Xanthoparmelia Scabrosa.

Worse yet it’s unknown why they market this using the Spanish Fly name, this beetle has been used as an aphrodisiac but it’s use is banned in many countries due to the its high risk for serious side effects. Since there are still some supplements which illegally use this, it’s unknown if Ultimate Spanish Fly also does the same. We have linked a breakdown of  the best supplements for natural sexual enhancement support in women.

Their name is M.D. Science Lab and at this time the only contact information were provided from an FDA warning letter:

The FDA sent them a warning in 2021 after inspecting their facilities. They found that the company broke the laws of the CGMP certification which upholds the standard of a supplement. They said that there was a lack of:

A total of 9 different violations were clearly outlined in this letter published online.  They advise making this change as soon as possible and to make sure all the violations are corrected as suggested.

They also do not have an official website and they only allow 3rd party websites to sell  this, making it impossible to know if the marketing claims are accurate.

Our review experts have concluded with certainty what their top picks were for natural women’s sexual enhancement.

There were only 2 customer opinions at the time of this review. Here’s what these users had to say:

It’s unclear whether or not the accusations of this being banned are true, since there was no published information about this claim found online. As far as it being in a higher dosage strength it may be that the customer is confusing it as there is just one version of this.

Since neither review was satisfying enough to help determine what a likely outcome would be, it’s impossible to determine what a likely expectation may be. There has to be much more information provided to help potential customers know for certain if it is good long-term, whether or not it’s safe, and what a likely effect may be. No testimonials or positive reviews can be found on any website, which casts doubt over its use.

The brands found here were considered to be the best at enhancing women’s sexual vigor.

Because there is no official website, reviews about the product, an existing company website, and no official money back guarantee, there’s a lot of worry over whether or not this would be effective. The only thing known is that the majority of ingredients are common to similar supplements, and they also add potentially dangerous stimulants. Their official name of Spanish Fly is also questionable since this ingredient is banned and shown to be very dangerous even when taken in small amounts. Though it does not appear they include it to the formula, it’s odd that a company would use a hazardous ingredient in their brand name.

We’ve looked at several forms of women’s’ sexual enhancement aids and the highest rated supplement was Libitrinex. This contains a rich blend of studied ingredients which can help optimize overall sexual function to keep women stimulated.

The way it works is through the use of natural aphrodisiacs that can help increase desire, blood flow, energy, and all while supporting a healthy mood. The ingredients have all been studied in 3rd party clinical studies, and the formula is produced in a FDA approved facility. Follow this cited link for a complete analysis of the highest rated female libido supplement Libitrinex.