Atkins Shake Review: Does it Work? 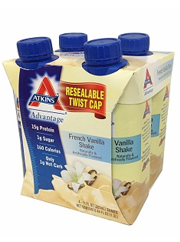 Atkins Shake is a meal replacement made as a low carbohydrate approach to weight loss.  There’s a total of 9 different ready to drink flavors, each one with around 1 gram of sugar and 15 grams of protein.

It’s meant to help with appetite suppression through the day. The company doesn’t offer much information about these shakes on their official website, but it’s known to have just 1 net gram of carbohydrates. Limiting carbohydrates are important for the Atkins plan, which is a diet based on the idea that carbohydrates cause weight gain. So is this a true solution to weight loss? What kinds of benefits have customers seen? This Atkins Shake review will provide you with all the information needed to make an informed decision.

Atkins Shake Ingredients and Side Effects

There are fears that this ingredient might have numerous negative health consequences. Paleo Leap.com adds:

So it can block the absorption of important amino acids found in protein. This can have numerous potential negative effects on health. This is because amino acids are essential for the body to regulate itself.

There’s also concern of this ingredient increasing the hormone estrogen. This can potentially lower testosterone and cause side effects to both men and women that include:

Soy also has what’s known as goitrogens. It may cause thyroid issues which can promote many health problems. One side effect from a malfunctioning thyroid is increased weight.

Though soy does have a well-rounded amount of amino acids, it’s considered a potentially dangerous ingredient.

Artificial Flavors: Chemical extract that’s made in a laboratory, it’s used to help mimic a flavor. It’s considered an easier way to provide a flavor without dealing with preservation or loss of flavor.

A clinical study published by PLOS One was conducted on mice. It showed extreme side effects.  The study listed the following:

This means it could cause serious issues to blood sugar, and it may increase hunger and increase food cravings.

It also targeted the brain directly, and altered the way the body deals with food. In this study, there was serious concern that this artificial sweetener could potentially cause harm to the human body.

Carrageenan: Thickener and stabilizer taken from red seaweeds.  A study published in the Cancer Letters journal it showed the possibility for extreme side effects:

Sucralose: Artificial sweetener that is not broken down by the body, so it offers no sugar grams.

Not only has this ingredient been found in wastewater, meaning it’s potentially harmful to the environment, but it’s also shown side effects in clinical studies.

Because of these studies, the Center for Science in the Public Interest downgraded its quality from “Safe” to “Caution”.

One such negative study was performed by the Washington University School of Medicine:

So this ingredient has been shown to damage blood sugar levels and it isn’t a satiating food source. It can potentially cause increased hunger when taken alongside other foods. Though this meal replacement is low in sugar, it’s also made with 2 potentially dangerous artificial sweeteners in sucralose and Acesulfame potassium.

There’s also a total of 160 calories, which is exceptionally higher than other shakes. This can potentially make it harder to lose weight.

Also included are a total of 15 grams of protein, of which only a few of it is whey protein concentrate, the rest is cheap processed milk protein. These cheap sources are also never shown as to what kind of amino acids they provide.

An amino acid profile should be standard when looking at a quality meal replacement. This assures you’re purchasing a quality shake that has what’s needed to truly replace a meal. Without it, it’s impossible to judge if the protein added is well-rounded and suitable to help the body run its many important processes.

The Price and Quality of Atkins Shake

The company offers an interactive map where you can find the nearest locations. They also offer their brand on their own website for $7.19 per 4 pack.  So a 28 day supple sells for $57.52.

Considering the addition of artificial sweeteners, flavors, and cheap protein, this brand is overpriced for what’s being offered.

They do offer an auto-delivery program for 5% off, but this is a way to lock people into contracts to automatically bill their credit cards. It’s unknown if the Atkins company provides effective customer service.

Due to the lack of an amino acid profile, and the use of many artificial and cheap ingredients, this brand fails to be a good solution for a meal replacement.

Atkins Nutrionals, Inc. owns this brand and they can be found below:

The company enforced a recall of their products after it was contaminated with a potentially fatal ingredient.

“Consumers are urged to destroy any potentially affected product”

It’s unknown how this ingredient was leaked, or whether or not anyone has suffered any serious consequences due to this problem. They also fail to provide any information on how this issue would be corrected.

These types of recalls where contaminations happen are not common for facilities which are inspected by third parties. A GMP certification is a standard that ensures you’re buying a product that is made in a clean and safe facility.

You can find several reviews from consumers online, here’s what a few had to say:

“made me thing of eating raw oysters”

“these make me sick to my stomach”

People have often complained that the old formula was better, and that this new version has an unpleasant taste. People also mentioned that the texture was off, and that it has a lingering artificial taste.

There are a lot of people concerned with the goop like consistency that made it less of a drink, and more of a thick difficult to swallow drink.

A lack of weight loss was also a concern, as people failed to see any changes. This included people who made sure to diet and exercise.

The most common complaints have to do with the overall taste. For many this was undrinkable and artificial tasting.

How Does Atkins Shake Compare?

Before making a final decision on Atkins Shake, it’s important to look at the customer reviews and the kinds of ingredients used. People complained often about the taste and texture of these shakes. Many were disappointed to drink it, and for those who bought large amounts, it was impossible to finish a case.

Also, the ingredients include 2 potentially harmful artificial sweeteners, cheap protein sources with only unknown amounts of healthy whey protein, and high amounts of calories which can make weight loss harder. These ingredients are not optimal for weight loss, since studies have shown some of them to cause metabolism disorders.

When replacing meals it’s important to use only natural ingredients, high quality protein, low calories, and no GMO soy. The very best option of 2023 meeting all these important traits is 18Shake.

This meal repalcemrnt is made only with high quality whey protein, no GMO soy, and only pure all natural ingredients. Best of all, its customers agree it’s a powerful weight loss tool. That’s why it has great reviews from its repeat customers. People think it tastes good and is an easy way to lose weight with only pure ingredients.

You can find testimonials on their website which confirms the powerful weight loss benefits. 18Shake is even backed by a 30 day money back guarantee, so you can purchase this shake without any fears of potentially losing money.

I buy it in bulk and I think it taste great.

I tried it vanilla and tasted like pepto bismo…disgusting