Teami Review: Does it Work? 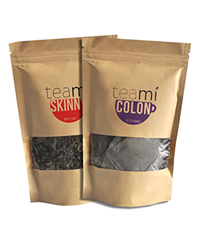 Teami is a diet plan system offering tea blends made to help you lose weight with a laxative and stimulant effect. Their Teami formula is made to help increase metabolism and energy, while reducing the risk for bloating.

Much like many other teas, these formulas are made without dairy, soy, or GMO ingredients. They also mention how it’s all-natural, though this is also common to other teas. The company has a large following on Instagram, and they use a lot of fitness models to advertise their products. So is this diet plan effective for weight loss? What kinds of results are possible, and is it safe? You’ll learn all you need to know to make an informed decision in this review.

Teami Ingredients and Side Effects

Hear are are the ingredients to each of their teas, the colon and skinny formula which are separated: Oolong: Made from the same plant as green and black tea, this is partially fermented.

It not only has caffeine, but also theobromine and theophylline, which stimulate the central nervous system.

It is also used to increase mental alertness and metabolism. Side effects are possible and they include:

“should not drink oolong tea with other stimulants”

“could cause serious heart problems”

This makes it important to watch out for any side effects, and to limit use.

Yerba Mate: Plant made to use tea; it stimulates the brain, heart, and blood vessels.  It can produce the same kinds of side effects that were listed in the Oolong section.

Web MD also mentions that taking this for a long time or in large quantities is:

Therefore, it’s not a long-term solution for weight loss. It can have serious potential side effects through its stimulants and the potential risk for cancer.

Dandelion Root: Herb that is used to reduce swelling while increasing urine production. Though there’s not enough evidence to prove these claims according to Web MD.

“there have not been any quality scientific studies on dandelion”

“dandelion can cause increased stomach acid and heartburn”

It’s also known to increase hunger as well. Without much evidence to go on, it’s unknown if this is a safe diuretic.

Rhubarb Root: A plant that’s used to treat digestive issues. It’s commonly added to foods as a way to add flavor. Possible side effects can include:

Long-term use has also been associated with irregular heart rhythm, muscle weakness, potassium and bone loss, and kidney failure.

It’s known to potentially interact negatively with medications. Possible side effects are many and they include:

It’s also not advised to take this if one has any heart conditions, due to the increased risk for side effects.

Psyllium Husk Seed: Seeds of this plant are used to cook with due to its fiber, and it’s also a treatment for constipation.

In certain people it can have allergic reactions as well as side effects. The FDA also states that his is a choking hazard:

This risk is increased if there are not enough fluids. It’s advised to always take this with sufficient fluids. Though it can also cause a lack of absorption of minerals and vitamins.

This can also target water-soluble vitamins that can be flushed out with this ingredient.

Phaseolus Calcaratus: Also known as rice bean, this ingredient is eaten as a food, though it’s known for causing flatulence unless properly cooked.

It’s considered a high protein source, though not much information exists on this ingredient in tea form.

Poria Cocos Stem Bark: This is a fungus that is used to teat diarrhea and GI bleeding. Web MD adds how:

“it hasn’t been well researched by scientists”

So it’s unknown if this would be safe for short or long-term consumption.

Valerian Root: Often used to treat anxiety and insomnia. It’s unknown exactly how this works. In some people this may have the reverse effect, and it can increase anxiety. There’s many laxative ingredients added to this that may make going to the bathroom more common.

Though this is not the healthiest solution to weight loss. Live Strong.com confirms this by saying:

It’s also not a long-term solution to weight loss. One ends up losing a lot of vitamins, minerals, fluids and electrolytes.  This can require extra supplementation in order to make up for what’s lost.

There’s also the use of understudied ingredients, which haven’t been proven such as porio cocos stem bark and valerian root. Taking these can potentially increase the risk for side effects.

It also relies on stimulants to make weight loss happen. Unfortunately, the added caffeine can produce many side effects.  Relying on caffeine for weight loss is not recommend, since it’s effects after repeat use are limited to just sleep loss.

The Price and Quality of Teami

One 30-day pack costs $49.99. This is essentially a mixture of teas, so it’s quite expensive for what you’re getting.

While the caffeine found in this tea can improve metabolism, this effect is not long lasting. Routine use of it is linked to a lack of benefits as Examine.com reports:

“to the point where the only benefit a user experiences is caffeine’s anti-sleep effect.”

Other ingredients in this formula are for reducing the amount of water the body stores, as well as laxatives for increasing bowel movements. This combination isn’t a long-term solution for weight loss. It’s also not a fat loss solution; it’s only meant to get rid of fluids.

Teami Blends owns this company, and they can be reached via:

They operate out of Miami, Florida, but they don’t add an address.

“Never received product but was charged”

“never received the product I ordered, even after contacting the company”

“they provide no info on returns”

Many were disgruntled to see that they couldn’t make a return. There have also been complaints on how the company operates, these customers couldn’t find any customer service support.

There’s many reviews available online. Here’s what customers have had to say:

“thoroughly regret spending this kind of money on this product”

“I was running to the bathroom every hour the next day”

“no weight loss, no loss of inches in tummy area”

There was a lack of weight loss benefits as well as many side effects for several customers. Some didn’t like the taste of the teas, and others claimed it was bland and unpleasant to drink.

How Does Teami Compare?

You might get the urge to try Teami after hearing about all its claimed benefits. Though the tea can produce some short-term stimulatory effects because of the caffeine, it’s also not a long-term solution. It’s also known to potentially cause side effects that include rapid heart rate, mood swings, and insomnia. This can actually make weight loss even harder.

Worst of all is the laxative like effects from most of the ingredients. Many customers also agree, it caused issues that included frequent bathroom trips, diarrhea, and other symptoms. The best solution for weight loss is a plan that doesn’t include stimulants and laxatives.

The best diet plan out now goes by the name of 18 Diet Plan. Not only is it specially formulated to help with weight loss, but also users agree, it’s a great solution for fast results.

The 18 Diet plan combines a wholesome meal replacement, all natural supplement, and eBook for meal replacement tips. This comes without any harsh ingredients that only bring about short-term results. This plan is a solution for long lasting results that are side effect free.

drank it 2xs and broke out in hives from literally head to toe!

A friend and I tried this 30-day teami Skinny Tea challenge it was an awful. After two weeks finally quit horrible stomach issues tension in my body and Jaws could not sleep and now have chronic joint pain that will not go away. Dangerous please do not use.

I am sad to say.. I love the results I was getting from Teami skinny, I was having a loss of inches and really noticing some good benefits.. however my face broke out into hive and was hot and itchy the whole time I was drinking it. Since I stopped drinking it my hives and itching has stopped, I am just dealing with some after peeling affects that suck. I wish I could go back to drinking it, it just wasn’t worth the allergic reaction.