Herbalife Formula 1 Review Does it Work? Proteins and Shakes Review 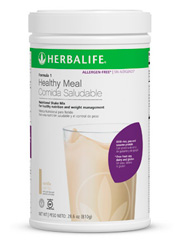 Herbalife Formula 1 is a meal replacement shake made with 21 vitamins and minerals for what’s claimed to be a healthy shake. There are a total of 12 different flavors, and each one has 9 grams of protein per serving.

Though information on this shake is limited, it’s said to help increase energy and provide long lasting fullness. There are also claims that the added soy protein alongside a low saturated fat and low cholesterol diet, can help improve heart health. Are there any benefits to using this brand? What kinds of weight loss results are possible? This Herbalife Formula 1 review has all the information you need to know to decide for yourself.

Herbalife Formula 1 Ingredients and Side Effects

Here are the ingredients to their French Vanilla flavor:

Soy Protein Isolate: A 90% protein by weight soybean extract which has a well-rounded amino acid profile.

This ingredient has been criticized due to its potential for increasing estrogen, inhibiting trypsin, and for providing a high amount of phytates.

Phytates are found naturally in soy, and in high amounts they’re known to block mineral absorption. This can lead to nutritional deficiencies, since minerals are important for regulating many body functions.

According to Paleo Leap, the goitrogens provided by soy:

This can potentially cause problems with the thyroid, which can increase weight and damage overall health.

Soy also has isoflavones which provide estrogen. They also mention that this effect can be damaging:

This effect can potentially lead to:

The University of Ottawa ran a clinical study which confirmed:

“Excessive soy intake has been reported to be responsible for the development of goiter, including thyroid enlargement”

It’s for all these reasons that soy is not considered a healthy protein source.

Fructose: Extract of fruit sugar which is added only to provide flavor. It has no nutritional value, and fructose has long been considered one of the worst sweeteners for overall health.

Louisiana State University ran a clinical study showing that fructose has a:

This means it can actually prevent hunger satiety, even if you eat a lot of fructose. It also showed negative effects on insulin, which is important for preventing diabetes.

Guar Gum: Thickener extracted from the guar plant. It has been used to soften the stool and to regulate blood sugar and cholesterol.

Possible side effects are many and they include:

Because of its potential choking hazard, it’s advised to always take this with sufficient liquids.

Carrageenan:  Thickener extracted from red seaweeds.  In processed foods they serve as a thickener, binder, and stabilizer.

It is a controversial ingredient because several independent studies have shown it to be potentially carcinogenic.

A clinical study by the University of Iowa confirms that carrageenan has the ability to cause:

Because of this they suggest:

It’s considered an unnecessary thickener that can potentially cause serious health problems.

Psyllium Husk Powder: Fiber source taken from a plant which is used to reduce fatty acids and cholesterol.  Much like other fiber sources it can reduce appetite.

Possible side effects can include:

Examine.com says that this ingredient:

“does not appear to be potent or reliable”

Their studies show it’s not a very useful ingredient for weight loss. It has added soy protein which is a GMO ingredient that can lead to multiple health issues. It’s also cheap to produce.

There is a well-balanced amount of vitamins and minerals, but due to soy’s potential for liming nutrient intake, it’s not a very good combination.

The addition of artificial ingredients is also included because it’s cheaper to flavor this shake in that way. Though replacing a full meal should be done with only wholesome ingredients, since a body responds better to natural additives.

The official website does not list the price for this, since you’re expected to talk to a distributor.

Someone did release a product list pricing for 2023, but it’s unknown if this is still up to date.

A Herbalife Formula One container with 30 servings sells for $39.77.

Though the amount of calories added is low with a total of 90, it’s still full of binders and artificial ingredients. Overall, the quality of nutrition is fairly poor.

Many studies have shown that the bulk of the ingredients can be potentially harmful.

The full company name is Herbalife International of America, Inc. They can be reached via the following:

The company is a multilevel marketing group, which means their sales are made by regular people who want to sell Herbalife for a commission.

The Federal Trade Commission is currently investigating the company into allegations that it’s running a pyramid scheme.

“These products are a hazard to public health”

They also have a total of 29 negative reviews against their company practices on the Better Business Bureau website.  People have had the following to say:

“have made several attempts to try to contact Herbalife”

Many have said that the customer service is lacking, and that the company did not allow any returns.

In researching opinions from brands owned by multilevel marketing companies, it’s important to check for biases. Sellers of these types of brands will sometimes add fake reviews to influence potential buyers.

Here are some verified reviews from users on Amazon.com:

“Even when mixing a shake it’s hardly drinkable”

“been on Herbalife for over 2 months and have not lost a lb.”

Many have complained about the taste and the way it mixes. For many it clumped up and had a chalky taste. Others say it tastes like baby formula and that it’s impossible to drink.

There are also many complaints from people who did not lose any weight, even with diet and exercise.

How Does Herbalife Formula 1 Compare?

When making a decision on Herbalife Formula 1, it’s important to not just look at its marketing claims of being a nutritious meal. There are flaws in this shake since it contains a sweetener shown in studies to be responsible for weight gain. It’s also made with GMO soy, which can potentially cause metabolism disorders, loss of mineral intake, and other issues.

The better choice is to take a brand without any artificial ingredients, that has no added GMO soy, and that’s lightly sweetened with an ingredient not known to cause metabolism disorders.

The best shake meeting all these criteria and more is 2023’s best meal replacement, 18Shake.

This shake has only a well-rounded nutrient dense formula that’s made without soy, artificial ingredients, binders, or any unnecessary additives. Best of all, customers have raved about it online. People say it mixes well, tastes great, and it’s effective for reducing hunger and body weight.

18Shake has real customer testimonials on their website, and they even offer a full 30 day money back guarantee.

You know why those people on amazon have crap reviews right? Because when you order from ebay or amazon, you run the risk of getting a product that has been tampered with. I lost 5 kgs on Herbalife. My mum lost 22kgs and she would probably be dead if it weren’t for the products