Fitmiss Delight Review: Does it Work? 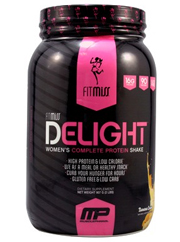 Fitmiss Delight is a women’s meal replacement shake made to curb appetite for hours, via a high protein and low calorie formula. There are claims that this shake will promote lean muscle growth, increase energy, and promote healthy weight loss.

It’s not specified why it’s only for women, but they do claim this brand has the ability to help one lose weight safely. There’s even added digestive enzymes that are added to help make processing this shake easier. With all the claims made, is this likely to help with weight loss? What have others found possible, and does it promote healthy weight loss? This Fitmiss Delight review will give you all the information you need to know to make a decision.

Fitmiss Delight Ingredients and Side Effects

Features here are all the ingredients to their Vanilla Chai Flavor:

Whey Protein Concentrate and Isolate: Extracted from the cheese making process, this protein source is well balanced and has a high amount of amino acids.

It’s also easy to digest, and it can be used for successful weight loss benefits. Though it’s unknown how much is added in Fitmiss Delight, since it’s mixed with several other protein sources.

Solathin: A patented form of potato protein which is added to help suppress appetite. No clinical studies exist for this ingredient from unbiased sources.

It’s unknown what kind of possible side effects are possible, or if it’s an amino acid rich source.

Egg Albumin: Dried egg whites which must be specially treated in order to prevent salmonella contamination. It contains less protein than egg yolk.

It’s also a cheap protein source that isn’t as wholesome as natural eggs.

Carboxymethylcellulose: Thickener most commonly found in laxatives and ingredients for cleaning. The International Weekly Journal of Science published their studies of this ingredient. When it was given to lab rats, it was shown to lead to:

This means that it’s potentially damaging to overall health. High inflammation can increase immune system damage, and it’s known to potentially increase the risk for cancer.

It’s also been shown to damage metabolism. So there’s a possibility of it causing extreme weight gain.

Acesulfame Potassium: An artificial sugar substitute.  The Changshu Institute of Technology ran a study which showed this ingredient when fed to nursing rats lead to:

“a long-dated function on the adult’s sweet preference”

This altered the way the mice preferred their sweets. These mice ended up craving sweeter foods. This can cause sugar cravings in people, as well as potentially harmful genetic changes.

PLOS One also performed a different study on this ingredient. In their studies, acesulfame potassium:

This could damage overall metabolism, and make weight gain much easier. That’s why in these findings it’s not advised to take this unnecessary sweetener. It’s added since it does not add much to the total sugar grams, but it’s also considered to be much worse alternative sweetener.

Sucralose:  Artificial sweetener which is around 1,000 times sweeter than regular sugar.

Science Direct tested this ingredient, and according to their studies it leads to:

So it’s a potentially hazardous ingredient. There’s also another study performed by the Journal of Toxicology and Environmental Health. Their findings showed that Sucralose:

Gut microflora is incredibly important for supporting the immune system and helping to improve mood. When microflora is altered, this can cause many issues in the body. It’s unknown what kind of a long term impact his may have on overall health.

Artificial Flavors: A man made synthetic ingredient used to mimic a natural flavor. It can be extracted from many different chemicals, and it’s unknown where Fitmiss Delight takes theirs from.

Sometimes, this can include common allergens such as wheat, corn, and soy.

The Price and Quality of Fitmiss Delight A 2 pound 26 serving jug costs $34.99.  Though this is low in price, it’s important to also consider the overall quality of ingredients.

There’s a low amount of calories at 90, 1 gram of sugar, and 16 grams of protein. All this seems good, but the quality of ingredients is poor. This is likely why it’s sold for so cheap.

Inside are 2 kinds of artificial sweeteners which can be harmful. Clinical studies have shown acesulfame potassium and sucralose to be harmful in many studies. Though there’s just 1 gram of sugar, where it’s sourced from isn’t quality.

There are also artificial flavors, several thickeners, and a low amount of vitamins and minerals. When replacing meals it’s important to make sure you get only nutritious ingredients, this is in order to prevent any nutritional deficiencies.

This shake has also been negatively reviewed due to its nutritional profile. As you’ll see in the “Customer Opinions of Fitmiss Delight” section, many people who read the ingredients label were surprised by the lack of overall quality.

The company is owned by MusclePharm, and they can be found below:

They currently have a D rating on the Better Business Bureau website, which is responsible for tracking customer satisfaction and company accountability.

Here’s what some have had to say that earned them a D rating:

“can’t seem to get a hold of these people”

“I ordered some products and did not receive them”

“refused to reimburse the cost of injury”

“I did not receive the products I ordered”

People mention that the company is difficult to deal with, and they fail to respond to numerous messages and phone calls.

There was also a lot of concern expressed over how quickly the product sends their products out. Many mention they failed to receive their products, even though they have since been charged.

The company did respond to some of these claims, but there were still many disgruntled customers who failed to receive what they paid for.

You can read many different reviews online. Here’s what some customers have had to say:

“it’s way too sweet, and it tastes like artificial sweetener”

“Wow does this stuff taste bad”

There were a lot of complaints about the lack of thickness to the shake as well as the artificial sweeteners. Many claim it was hard to drink, and that it’s incredibly thin for a meal replacement.

People have tried to add ingredients to help make it blend better, but for many there wasn’t enough that could be done. This comes from people who made sure to add many different combinations. It’s strange that many complained about the texture and thinness, since there’s many added cheap thickeners.

Some also complained about a lack of weight loss benefits. For many there was no benefit to using this shake. People added how they made sure to include diet and exercise, yet they still failed to see any benefits.

How Does Fitmiss Delight Compare?

Fitmiss Delight is promoted as a specially formulated weight loss shake for promoting healthy women’s weight loss. This might give it the impression that it’s made specifically with one gender in mind. However, there’s nothing in this shake that proves it would help benefit women more. Also, many customers have complained about the thin taste and the lack of weight loss results. This shake also has a blend of artificial ingredients, binders, and cheap artificial sweeteners which can make weight loss harder.

To properly lose weight via a meal replacement, it’s best to seek out a brand made exclusively with all natural ingredients, no binders, only quality protein, and backed by a responsive company.

2023’s best meal replacement is 18Shake. It met all the demands for a quality shake.  It’s made only with high quality whey protein, and you get a blend of specially formulated ingredients for weight loss. That’s why men and women alike have sent in numerous positive reviews, and you can even read impressive testimonials on their official website.

People have long been impressed with the simple to achieve weight loss benefits. This shake has a well-rounded nutritional profile, and many customers continue to use it for weight loss.

18Shake is even backed by a great 30 day money back guarantee, so there’s no risk in using this shake and potentially experiencing issues. It’s the best meal replacement out on the market due to its stellar ingredients and great return policy.

A friend recommended this supplement and I started using it as prescribed. I have lost over 27 lbs within the space of 6 weeks. I use it as my lunch replacement. It has helped me clean my diet. I now eat healthy, and exercise every day. What I particularly love about it is the manner in which it fills me up. The product is unique; I had tried other protein powders before and always felt hungry within an hour. I mix this supplement with almond milk and it tastes great! My workouts aren’t excessive and I’d say I now live healthy!!

If you ask me, I’ll tell you that I just find myself loving this product. I am not a seller for the company or hope to get some freebie in return. I am just someone who finds this supplement fascinating and effective. The taste is something else. You’d definitely come back for more, especially if you’re ordering for the first time.