Myoplex Review: Does it Work? 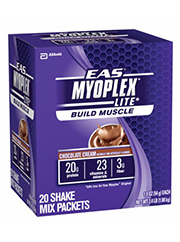 Myoplex shake is a meal replacement made to help people stay lean and strong. There’s a total of 24 vitamins and minerals, as well as 42 grams of protein.

There’s both ready to drink and powdered versions of this meal replacement. Their original formula is intended to be taken alongside a diet and meal plan. It claims to be effective for muscle building, and as a general meal replacement. So is this meal replacement truly a well-rounded shake? What have other customers experienced? This Myoplex review has all the information needed to make an informed decision.

Myoplex Ingredients and Side Effects

Corn Maltodextrin: This is a highly processed thickener and sweetener made from corn. It’s a rapidly absorbed, blood sugar raising ingredient that ranks high on the glycemic index.

Live Strong.com mentions many of its flaws:

“sugary maltodextrin promoted the growth of unhealthy bacteria, which damaged the intestine and increased the risk of inflammatory disease”

Several side effects are possible from this ingredient such as:

Due to its processed and refined nature, it can be potentially risky for dieters. This ingredient has been shown to cause obesity if not taken with caution.

Clinical studies have also been released which show it can have inflammatory problems. This can potentially lead to serious health risks within the body.

Artificial Flavor: Man made synthetic ingredient added to help add flavor that would be otherwise difficult to keep.

It can be extracted from many ingredients such as common allergens. In some, it may produce unwanted side effects.

Carrageenan: Thickener made from edible seaweed. This ingredient has clinical studies, which have shown it to be potentially dangerous.

One study by the Dana Institute for Disease Prevention found that it:

Acesulfame Potassium:  Artificial sweetener that provides no calories, while being around 200 times sweeter than sucrose.

A study performed by PLOS One was conducted on mice. It found that this ingredient:

Though this artificial sweetener is meant to help make the shake easier on blood sugar, it showed numerous damaging effects in clinical studies.

This includes not being satiating enough, so you can eat lots of it while being able to continue to eat more. It also affected the way the mind responded to the foods given. It’s unknown what kind of a long-term effect his may have on obesity.

Sucralose: Artificial sweetener which the body cannot break down, so it offers no calories. It can be up to 1,000 times sweeter than regular sucrose.

There has been concern over the use of this ingredient. Clinical studies have shown different potential side effects.

The Journal of Toxicology and Environmental Health preformed one study:

So when eaten, Sucralose may be considered toxic by the body.

Xanthan Gum: Thickener and binder made from a fermented sugar and a bacteria. Due to it being often extracted from common allergens such as corn, wheat, and soy, it may produce allergies in some. Other possible side effects from this cheap thickener include:

This ingredient is often added as a cheap substitute to other fiber sources. Though there’s just 2 grams of sugar, much of this comes from artificial sweeteners that have been shown to potentially cause metabolism disorders. There’s also highly processed additives in this shake.

A total of 290 calories is offered in their original powdered version. This is significantly higher than most meal replacements. When looking to lose weight, it’s important to limit calories, as it’s what causes weight gain.

There is a lot of protein at 42 grams, which is 84% of the daily value. The problem is that the protein added doesn’t all come from a quality source. Some of this is from calcium caseinate and milk protein concentrate. Both of these ingredients are cheap and found for much less elsewhere.

Due to the artificial ingredients, potentially dangerous artificial sweeteners, and the high amount of calories, there’s a possibility for this to actually increase weight.

The Price and Quality of Myoplex

This meal replacement is pricier than most brands. The high amount of  calories, artificial ingredients, and processed additives aren’t quality. They’re all cheap to add, and it this price point, it shouldn’t be this expensive.

There’s a possibility for serious weight gain, since clinical studies have shown many of the individual ingredients to be damaging to one’s metabolism.

There have also been many studies performed on the individual ingredients that show them to have health risks. In combination, it’s unknown what kind of a total impact this may have. Some ingredients have been shown to cause tumors, a lack of satiety, blood sugar issues, and many other serious issues.

Abbott Laboratories owns this brand, their customer service information is as follows:

No information is listed about whether or not they offer a money back return policy.

They have had one of the largest criminal settlement lawsuits out of any drug company. The FDA mentions:

“Abbott Laboratories Inc. has pleaded guilty and agreed to pay $1.5 billion to resolve its criminal and civil liability”

This settlement was because of:

They were found guilty of claiming to offer health benefits from one of their drugs. This was the 2nd largest penalty ever imposed on a US drug company.

Here’s opinions from users of this meal replacement:

“it tastes sickenly super sweet and a little slimy”

“This product tastes like dirty feet dipped in creamed-corn”

“Sad to say I wasted my money”

There were numerous issues that customers had with this shake.  Many said it had a very artificial sweet taste, which made it impossible to drink. Some people had to throw away this shake immediately after giving it a try.

Some also added how this shake does not mix well, and that the texture is difficult to swallow. It had a texture which was either too thick, or “slimy”.

It’s likely because of all the artificial ingredients, that people have kept mentioning how it tastes strange.  Customers also mentioned that they couldn’t drink it after just a few sips.

How Does Myoplex Compare?

When deciding on Myoplex, you have to look at the high amount of calories, and many processed artificial ingredients. This meal replacement does offer a lot of protein, but realistically, the average person doesn’t need this much. Also, because of the high calories and kinds of ingredients added, it’s possible for this to promote weight gain, instead of weight loss.

A much more wholesome meal replacement is offered by the 2023 best, 18Shake.  It has a high quality duo protein blend of whey protein, just 1 gram of sugar from natural stevia, and high quality fiber for proper appetite suppression. It’s for all these reasons and more that customers leave nothing but good reviews. People mention it mixes well, tastes great, and that it’s really beneficial for quick weight loss results.

18Shake is even supported by a full 30-day money back guarantee. It takes all the risk out of trying this customer approved meal replacement.

One Response to Myoplex Review

Thank you for the warning.
My friend don’t like Myoplex this company ad is cheesy! Patrick had a horrible response to this cheesy Myoplex with problems in digestive system and had a chellenge customer support. Father advised me do not buy the supplement.