Beachbody Shake Review: Does it Work? 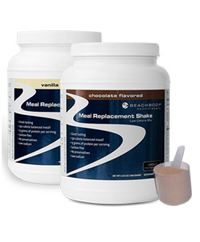 Beachbody Shake is a meal replacement shake made with whey and soy protein for what’s claimed to be a nutritious meal. It’s said to contain the proper mixture of carbohydrates, fats, and protein for appetite reduction and increased energy.

You can find it in both chocolate and vanilla, each without preservatives, artificial colors, or aspartame. It’s advised to take this shake with enough water, low calorie snacks, and other healthy protein sources for managing weight. Is this shake truly a nutritious option for dieters? What have others experienced? In this review you’ll learn everything you need to know about Beachbody shake.

Beachbody Shake Ingredients and Side Effects

The Mayo Clinic has mentioned this ingredient is known to potentially cause side effects:

“may cause atopic eczema, asthma, bad taste, bleeding, bloating, constipation ,damage to pancreas (and other symptoms)”

There are also several other side effects that may occur. The also add that it may increase estrogen levels. This can reduce testosterone, and cause hormone malfunctions, which may make weight loss more difficult.

A study published in Pub Med mention that it could cause protein deficiencies:

Fructose: Simple fruit sugar that when extracted from fruits, is known to potentially cause many health problems.

Multiple studies have shown a possibility for issues, the ScienceDirect group performed one such study, they found:

Another study by the University of California, Davis adds:

“dietary fructose could therefore increase the likelihood of weight gain”

A total of 7 grams of fructose are added to this shake. Reducing this sweetener is important for preventing potential health problems.

Fructose, like other sweeteners, has no purpose other than to help flavor these shakes. It has no nutritional value, and instead may actually cause many problems.

Guar Gum: Fiber extracted from the guar plant. It’s possible for it to promote choking or blockages in the intestines and throat.

It may also produce other unwanted side effects that include:

It’s advised to always take this with liquids in order to prevent side effects. This is considered a cheap thickener and binder, which is used to substitute for more substantial forms of fiber.

The Center for Science in the Public interest placed a Caution label to this ingredient, due to this potential for causing leukemia in mice.  A study by the Washington University School of Medicine also studied this sweetener, they found it:

“Affects Glycemic and Hormonal Responses to an Oral Glucose Load”

So it has an effect on blood sugar levels, though this ingredient is added as a sugar substitute, which isn’t supposed to have this effect. This can potentially produce issues that may not reduce hunger. When using this ingredient on mice, it was shown to not be satiating. So one could potentially eat large amounts of it without experienced satiety.

Kelp: A form of algae that contains amounts of iodine. Live Strong.com adds that this can cause problems:

Therefore, it’s important to make sure to control the intake of this ingredient. It’s unknown how much iodine this provides.

When the thyroid is damaged, this can lead to numerous health effects as well as an increase in the rate of obesity. Though there’s a total of 15 grams of protein, not all of it comes from whey protein. Some of it is from soy, which has been shown to be potentially dangerous for many reasons.

There’s’ also a combination of sweeteners which are both potentially dangerous, 7 grams of sugar are added which come from fructose. This ingredient has been shown to be potentially dangerous, due to its ability to cause metabolism disorders. Since it has no nutritional value, it’s important to limit this sweetener as much as possible.

There’s also artificial flavors added, instead of just pure natural ingredients. Though the company mentions they add no artificial colors, they still failed to make this an all-natural meal replacement.

The Price and Quality of Beachbody Shake

One 30 serving container sells for $39.95.  This shake is full of thickeners, high amounts of potentially bad sweeteners, and a weak form of protein in soy.

This quality isn’t very good when you consider all its ingredients. The possibility for weight gain and side effects is possible due to the added sugar and thickeners.

For the price paid, it’s not a very good meal replacement. You’re paying for a common mixture of ingredients found in basic meal replacements. There’s also unknown amino acids added, since the company fails to add the amino acid profile.

This is important for figuring out if the protein is well balanced enough to satisfy as a full meal.

The creators of this brand go by the name of Beachbody, LLC. You can reach them via the following contact details:

They currently have a total of 770 customer complaints on their Better Business Bureau page, here’s what people have had to say:

“Withdrawn account funds from an order that was never finalized”

“Charged… even though it was canceled before trial was over”

“cancelled my contract… and the company keeps charging my credit card”

“Beachbody’s billing practices are not clear and concerning”

Many people had issues with trying to cancel their subscriptions, and people have struggled to contact the company to cancel. Customers were concerned that they didn’t have any idea it would be so difficult to work with the company.

Of the total 770 reviews, many were dissatisfied and unsure of how to deal with the company. Beachbody, LLC did comment on some of these problems, but it’s unknown what happens to customers who don’t file complaints on independent websites.

Though the company offers a 30-day money back guarantee, many struggled to get a hold of them via email or phone.

The official website allows customers to review this shake. Here’s what some customers have to say:

“probably the nastiest meal replacement I’ve ever had”

“It’s gritty, thick, and literally slides like pudding down your throat”

“DOES NOT MIX WELL AND TO THICK”

“I could not get over the taste”

People had issues with trying to finish drinking this shake. Users often complained that it had a taste that was undrinkable. Not only were the flavors criticized, but also people thought it was much too gritty, and that the texture was bad.

There were also problems with the lack of proper mixing. Customers tired using different liquids and ingredients, but there were still issues with how it mixes. The consistency was off, which when combined with the taste, can make this shake difficult to drink.

Some also added how they didn’t find it to suppress appetite well enough. There was concern that this meal replacement isn’t an effective weight loss shake.

How Does Beachbody Shake Compare?

When deciding on Beachbody’s Shake, it’s important to pay attention to the customer reviews and kinds of ingredients used. Many customers failed to see any benefit from this shake, and several thought it didn’t taste good, nor did it help with appetite suppression. There’s a high amount of sweeteners added, which may be potentially harmful.

Another issue with this shake is the kinds of ingredients found in GMO soy, artificial sweeteners, and artificial flavors. All natural solutions are much better when one is looking to lose weight. The very best all natural meal replacement is out now, and won the best of 2023. It’s an all-natural shake called 18Shake.

This meal replacement is made solely with pure, high quality, and beneficial ingredients for real nutritional value. Customers have also experienced great weight loss results that you can read about on their official website. People also mention it mixes well, and that it’s great for suppressing appetite, all while tasting good via its chocolate or vanilla flavors.

18Shake is even supported by a full 30-day money back guarantee. This takes the risk out of purchasing this shake, and it shows the company is willing to back up their product.

It’s sad that the only thing that lost weight after two months was my wallet.

It was already bad enough that it didn’t work. The fact that it’s pricey makes it even worse.

Reynaldo hate it, their shake is sleazy!
Reynaldo had a terrible response to this shady product with upset stomach and had a problem delivery.Never try this supplement unless your physician authorizes this product.