GNC Lean Shake 25 Review: Will it live to your expectations? 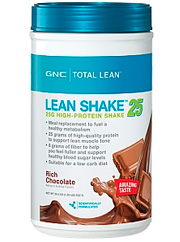 GNC Lean Shake 25 is a meal replacement shake made to help control blood sugar levels, as well as support weight loss. The 25 in GNC Lean Shake 25 stands for the 25 grams of added protein, which is said to be beneficial for appetite reduction.

Customers do have to make sure to reduce calories, add exercise, and drink 2 shakes a day for results. There’s a total of 8 grams of fiber, 24 vitamins and minerals, and all of it is supposed to improve metabolism and support lean muscle growth. Are these claims actually true? What kinds of effects have customers experienced? This review will provide you with real customer opinions and a full analysis for you to decide if this is an effective meal replacement. Carrageenan: A thickener that has been criticized due to its potentially damaging health effects.

One such study by the American Health Foundation found that carrageenan had:

“an enhancing effect in colorectal carcinogenesis”

The study showed an increase risk for tumors in rats. Other studies have also confirmed these findings. In this clinical study it was shown that this ingredient was cause for concern, as the results of tumors was significant.

Cellulose Gum: A processed thickener that a study by the International Weekly Journal of Science revealed:

In this study, it was shown to lead to increased inflammation and long term weight gain.

This ingredient is cheap to add, and its effects on overall health have shown to be potentially damaging.

Partially Hydrogenated Soybean Oil: A processed form of soybeans which is used to help make liquids and solids combine together better, as well as to preserve food.

When oils are partially hydrogenated, this process forms trans fats.

The Center for Science in the Public Interest has expressed concern over the safety of this ingredient in any amounts, because in their findings it:

“increase the risk for heart disease”

“it decreases the “good” (HDL) cholesterol, which may increase the risk for heart disease even more”

“trans fat may have additional harmful effects to the body”

It’s suggested to limit trans fats of any kinds, as it can potentially cause serious health problems.

Polysorbate 60: Emulsifier made with sorbital and fatty acids. It’s used to help keep oil intact.  The Journal of National Cancer Institute revealed that this ingredient:

“can cause detrimental reproductive effects, organ toxicity, and cancer in high doses”

It is also commonly contaminated with 1, 4 dioxane, which is a carcinogen.  The Be Food Smart website has rated this ingredient a F, meaning it failed to meet safety standards.

Sucralose: An artificial sweetener which can be upwards of 1,000 times much sweeter than sucrose.

Multiple studies have shown potential side effects. The Washington University School of Medicine found that sucralose:

“Affects Glycemic and Hormonal Reponses to an Oral Glucose Load”

This study showed it can cause blood sugar problems through an increase in insulin. Artificial sweeteners are often claimed to be a great substitute for sugars, but this ingredient still showed the same kinds of effects that regular sweeteners would have.

Acesulfame Potassium: Artificial sweetener that is not broken down by the body to provide calories.

A study conducted by the School of Bioscience and Food Engineering found that this ingredient:

“can be ingested by the prenatal or postnatal mice through their mother’s amniotic fluid…. Producing a long-dated influence on the adult’s sweet preference”

Mice that were fed this ingredient through their mother’s milk grew up to prefer sugary foods. It’s unknown what kind of long-term effect this may have on health. The kinds of ingredients used include trans fats, thickeners which can potentially cause side effects, artificial sweeteners, artificial flavors, and a combination of both good and bad protein.

The heavy use of binders and thickeners may also present problems, as clinical studies have shown these ingredients to be potentially damaging to metabolism.

This brand does have little sugar at 3 grams, but the two artificial sweeteners have been shown to be side effect causing.

The Price and Quality of GNC Lean Shake 25

Considering the amounts of artificial ingredients and potentially harmful binders, this brand is greatly overpriced.

It’s good that there’s 25 grams of total protein, but not all of this comes from whey protein.  Some of it comes from cheap sources such as milk protein concentrate, nonfat dry milk, and sodium caseinate.

There’s also hidden amounts of trans fats added due to the processed soybean oil. There are far too many processed additives in this meal replacement to consider it a healthy choice. Multiple studies have been performed on several of these additives, and they’ve shown many potential side effects.

GNC Holdings, Inc. is the owner of this brand, and you can find them below:

The company is currently facing a lawsuit by the Oregon attorney general over the addition of potentially harmful ingredients. USA Today reveals:

Both of the added ingredients have been banned by the FDA.  If these allegations are true, it’s unknown why they would add these potentially damaging ingredients. It’s also unknown if other products of theirs might be contaminated with unwanted and illegal additives.

They also have a total of 274 negative company reviews on Pissed Consumer. Since GNC have their retails stores, the way their businesses are run can depend on which location you go to.

Some customers complained about aggressive sales team members, and rude staff. Here’s what a few people had to say:

“salesmen had misrepresented the efficacy of GNC products”

People had negative overall sales experienced, and many claim their personal information was given to other companies. This includes email, phone, and address. Unsolicited offers were a concern according to users of GNC products.

Several reviews are available online, here’s what a few people have had to say:

“it was nearly unbearable”

“Its really thick and tastes so so bad”

“I was starving in an hour or so”

Taste was a major concern for customers. Many felt it was undrinkable due to the artificial flavor, and also the consistency was too thick to drink.

People also were disappointed with the lack of appetite suppression and weight loss benefits. Many had to eat more to make up for the lack of satiety. Even those who followed a weight loss diet and exercise plan still failed to see results.

How Does GNC Lean Shake 25 Compare?

When considering GNC Lean Shake 25, it might be tempting to give it a try due to its cheap price and claims of being able to suppress appetite. There is a lot of protein added at 25 grams, but it’s important to look at the quality of ingredients and customers reviews. Many felt hungry after drinking this shake, and people often complain about how difficult it was to drink due to its harsh taste.

This shake also has several artificial ingredients, and potentially harmful additives which are added to preserve this meal replacement. When choosing a meal replacement, it’s important to seek out all natural, non-processed, and nutritious ingredients.

The very best meal replacement of 2023 meeting this criteria and more is called 18Shake.

It’s made only with natural ingredients, no binders or fillers, and customers agree it tastes good and mixes well. Not only were customers impressed with the overall nutrition, but people have lost significant amounts of pounds. You can read about these rave reviews on their official website.

18Shake is backed by a great 30 day money back guarantee, so there’s no risk in using this customer approved meal replacement.

Yes I use this one myself from g.n.c. it works great!! Nothing’s better!!