BodyKey Review: Does it Work? 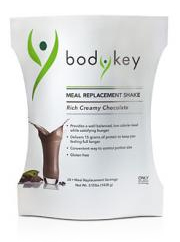 BodyKey is a meal replacement shake claiming to be a satisfying and easy to make shake. You can find it in both ready to drink liquid formulas, and in powdered form.

8 different flavors are provided, and they’re all claimed to be helpful for proving a full range of nutrients. Information on this meal replacement is limited, but it’s part of the companies weight loss plan. So is this truly an effective meal replacement? What have people experienced with this shake? You’ll learn all about BodyKey in this full review.

BodyKey Ingredients and Side Effects Soy Protein Isolate: Soybean extract which is around 90% protein by weight. Though this ingredient does have the full amino acid profile, it’s often criticized due to it often being GMO.

There are also other reported health problems associated with this ingredient. Web MD mentions:

There is also concern that this ingredient may contribute to excess estrogen levels. Mayo Clinic adds:

“soy contains estrogen like chemicals, the effects of other agent believed to have estrogen-like properties may be altered”

They also list several other problems associated with soy use.

One other study published by the Washington State University found that soy:

These Phytates are known to block proper protein absorption. So it’s unknown what kind of an effect this may have on the protein content found in this shake. Even with  a total of 16 grams of protein, it’s possible for some of it to be reduced and not well absorbed.

Xanthan Gum: A cheap thickener added to help provide a satiating effect. It’s also used as a laxative. Possible side effects from its use can include:

It’s also often extracted from common allergens that include wheat, corn, and soy. Though it’s unknown where this ingredient is sourced.

L-Carnitine Tartrate: Ingredient made in the body, and found in food. It’s used to help create energy as well as to protect mitochondria in the human body.

Though it’s added in supplement form to help with fat burning, Examine.com mentions the limits of this ingredient:

Therefore, there’s no need to use this additive. Many foods already contain this, and the body is usually sufficient in this.

Sucralose: Artificial sweetener commonly known by its brand name of Splenda. A study conducted by a Dr Morando Soffriti found that:

Because of this, the Center for Science in the Public Interest had to issue a Caution label on this ingredient.

Slendesta Potato Protein Extract: An extract taken from potato skin. It’s used to help reduce body weight. Though a study performed by the European version of the FDA was conducted. The European Food Safety Authority found that this ingredient had problems:

So there’s no reason to use this ingredient for any nutritional benefit.

Kelp: A kind of seaweed added due to its iodine content, which can be used to improve thyroid help. The problem with this  ingredient is that the  amount of iodine it provides can vary depending on where it’s  sourced.

Live Strong.com has listed possible side effects, they mention that it may:

When the thyroid is altered, this can lead to weight gain as well as many other serious health issues. Without knowing the full iodine content in this brand, it’s impossible to properly dose.

The Price and Quality of BodyKey

This is a fairly expensive meal replacement for what’s offered. You get 16 grams of protein, which is good, but some of it comes from GMO soy. Soy has also been criticized since it’s known to potentially cause hormone issues and a lack of protein absorption.

It also has a fiber blend that is made up of common thickeners, which can potentially cause side effects.

One sweetener in this is healthy in Stevia, but they also add Sucralose, which may cause many health problems.

So this meal replacement combines both cheap and good ingredients. Though overall, for the price paid, this isn’t worth the high cost.

The manufacturers go by the name of Amway, they can be reached via the following contact details:

The company has a total of 12 different complaints on their Better Business Bureau page. This is an independent site, which tracks customer satisfaction, and company approval. Here’s what people have had to say:

“Lied about… products, gave me the wrong products and took extra money”

People were often disappointed with the way the company treated them. Some have explained that they often tried to cancel their auto-shipping programs, but that the manufactures continue to charge.

There were also complaints that they are difficult to deal with, and that they felt they are being scammed.

They operate as a multilevel marketing company, so they use regular people to sell and market their brands. They have had issues in the past for the following controversies:

The company has faced much criticism from customers, as well as through several high profile lawsuits.

Any product sold by a multilevel marketing company will often be flooded with fake reviews. This is because sellers of these brands known they will earn a commission if they sell more products.

“I wouldn’t recommend it”

Many concerns were expressed about the taste, quality, and lack of weight loss properties. Customers felt that this shake was undrinkable, and that it wasn’t worth its high cost.

There was also a lack of appetite suppression from people. Overall, the only certified reviews about this shake were negative. Though there wasn’t many online reviews.

Before you make a final decision on BodyKey, it’s important to remember the high cost and use of cheap ingredients. This shake does have high hamounts of protein and just 1 gram of sugar, but it’s not the most effective weight loss shake. There are better brands that have only natural ingredients, and a well rounded nutritional profile.

When choosing a proper shake it’s important to look for only natural ingredients, no artificial ingredients, wholesome protein, and a well-rounded amino acid profile. The very best shake out of 2023 goes by the name of 18Shake.

This meal replacement has a blend of 2 forms of whey protein for healthy amino acids, as well as proper appetite suppression. It’s also made with no fillers, artificial ingredients, or any unwanted additives. Customers mention it’s a great meal replacement when you’re looking to lose weight. That’s why many have left glowing reviews on the websites testimonials section.

This shake is so well reviewed, that the company backs it up with a 30-day money back guarantee. 18Shake has already helped so many people lose weight, and that’s why it’s supported by a great risk free return policy.

One Response to BodyKey Review

Thank you for the post!
My friend don not like BodyKey their shake is shabby.
My friend had a bad reaction to this cheap pill with upset digestive system and had an issue with a shipment.Never take supplement unless medico recomends this product!