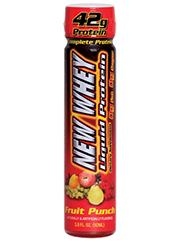 New Whey Liquid Protein is a less than 4 ounce drink made as an easy to absorb protein source. There’s a total of 42 grams of protein offered per serving, and 7 different fruit flavors are available.

It’s claimed that the whey protein in this formula is far better absorbed than other brands of protein. This is due to peptides which make it easier for the body to use. There’s also no added carbohydrate, fats, or sugars added. Its container is also said to be heat stable and nearly impossible to break. Is this really a good nutrition source? What kinds of weight loss benefits are possible, if any? This New Whey Liquid Protein review will help inform you about the full possibilities.

Collagen Protein Isolate: Made from a common protein found in the skin, hair, and nails. There is a rating scale that determines how well the protein source is. This is called a PDCAAS or Protein Digestibility Corrected Amino Acid Score.

This determines how well the amino acids added are used by the body. So if a product claims to have high protein, it’s still important to know if the body is even capable of using it.

Collagen protein has a score of 0.8, which means it’s extremely poor.  The amino acid content is completely missing from this ingredient, and it requires extra protein sources to make up for the lack of amino acids found in this.

A study in the Archives of Pediatric and Adolescent Medicine showed that this ingredient increased the risk for bone fractures. It showed an increase of:

This was published in a respected Harvard review.  Another study published in General Dentistry showed that this ingredient wears down the enamel in teeth. Live Strong.com mentions:

“dental erosion is one of the major concerns”

Another study by the National Institute of Health showed an increase of kidney problems:

“associated with a twofold risk of developing kidney disease”

There’s many different potential health problems associated with the use of this ingredient.

Artificial Flavor: Synthetic lab made ingredient used to mimic a natural taste. It’s an unnatural way to make a certain flavor appear, which may be harder to capture than a natural ingredient.

When it’s made it can be extracted from many different chemicals from different food sources. The combined effect is a stable flavor that does not expire like a natural ingredient would. However, because it can be made from contaminants, it’s unknown if this ingredient would be safe to use.

A study on this ingredient was performed on rats. The Journal of Toxicology and Environmental Health showed that this additive:

P-gp is expressed in the body when a potentially toxic substance enters the body. Also, microflora is important for regulating the immune system and aiding proper mood.

The combined effect of these two symptoms means that Sucralose is a poor sugar substitute.

Sodium Hexametaphosphate: A salt used to buffer ingredients. One study by the Cosmetic Ingredient Review Expert Panel showed that this ingredient leads to:

Animals studied also had effects on their skin:

“was a severe skin irritant”

The minerals in bones were also harmed due to:

This cheap additive showed many extreme side effects when tested on animals. It’s unknown what kind of health consequences it may have on humans.

Acesulfame Potassium:  Calorie free artificial sweetener which some studies have shown is potentially damaging to health.

A study featured on PLOS One showed that this ingredient had a negative impact on health showing:

It had an effect on blood sugar as well as the hormone leptin, which lets the body know it’s no longer hungry. This can potentially cause metabolism disorders and increased weight gain in the future.

Sodium Benzoate: Food preservative that when combined with ascorbic acid or vitamin C, can form benzene, a severely harmful contaminant.

This ingredient has also shown to lead to hyperactivity.

Potassium Sorbate: Used to preserve foods, this ingredient in its pure form is a skin and eye irritant.

A study published by the Turkey Ankara University showed some extreme side efects:

“clearly seen to be genotoxic to the human peripheral blood”

This can lead to issues such as DNA damage, which can have serious long-term health effects. DNA damage can disrupt many natural body processes, and it can potentially lead to cancer.

Red 40: Food coloring which is the most common of all food colorings in the US.  It may also lead to side effects that include:

The Center for Science in the Public Interest has also petitioned the FDA to ban this ingredient, since it’s been shown to be potentially harmful to the DNA in mice. They add that there’s no nutritional benefit, and that it only serves to provide a fake color that can be easily replaced. There are preservatives and artificial colors and flavors added. This is never a good sign as it can potentially cause numerous aside effects.

Also, the quality of protein is low since there’s collagen added. Whey protein is a good addition, but it’s brought down by the many of the artificial ingredients.

There are artificial flavorings, artificial sweeteners, and a high amount of calories at 180 per serving. This is significantly higher than the average protein shake. When looking to lose weight it’s important to limit overall calories.

The Price and Quality of New Whey Liquid Protein

The company offers direct sales off their website. One 12 pack sells for $43.98 with shipping and handling.

It’s considerably expensive when you factor in the amount of artificial ingredients and preservatives.

This brand is marketed as containing no sugar, and while this is true, the kinds of artificial sweeteners added may actually cause metabolic syndromes. This is due to the numerous clinical studies which have shown a negative impact on the satiety hormone leptin, as well as disrupted blood sugar levels.

The name of the company is New Whey Nutrition, they can be found via the following:

The company currently has a B- rating on their Better Business Bureau page. This is due to a customer complaint of the collagen protein. Which the customer says:

“Collagen Protein Isolate is not absorbed by the human body”

“feel scammed by this company”

As mentioned before, the amino acid score of collagen protein is poor, and it’s not a quality amino acid source.

“wasted a few hundred bucks on this junk”

“Made me physically ill to drink”

Taste was a major concern for customers. Many said it was much too thick and artificial tasting. It’s often compared to an overly sweet jello treat.

There was also major concern about the lack of amino acids. People added that the collagen protein is not well absorbed, and that even if it’s 42 grams of protein, it’s not from a quality source.

Before you make a judgment on New Whey Liquid Protein, keep in mind many customers have been dissatisfied with both the taste and the lack of quality protein. Added to this mix is no sugars, fats, or carbohydrates, which is good, but in order to have this in place the company adds many artificial colorings, flavors, and sugars. Some of which have been shown in clinical studies to cause health problems.

When you’re taking a liquid protein source it’s important to make sure you’re getting only wholesome, all natural, and customer approved flavors. One such brand offering all these positive features is 2023’s best meal replacement 18Shake.

Inside of this customer approved shake are pure, all natural ingredients, high quality whey protein, no GMO ingredients, and flavors which customers say taste great. This meal replacement has also been shown to be a great solution to safe and effective weight loss. There are even testimonials featured on the official website from customers who have lost weight.

18Shake is even backed by a solid 30 day money back guarantee, so you can enjoy this shake without any risks.