Glucerna Review: Does it Work? 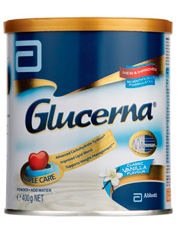 Glucerna is a meal replacement shake made with CARBSTEADY, a slow digesting carbohydrate source to regulate blood sugar. It comes with 27 vitamins and minerals, and it’s gluten and lactose-free.

They provide a graph showing the steady blood sugar control possible, in comparison to a “leading national beverage”. There are 3 flavors available in vanilla, strawberry, chocolate, and butter pecan. There’s also a total of 10 grams of protein, 23 grams of carbohydrates, and 3 grams of fiber. It claims to be the #1 doctor recommended brand, so is it truly effective for weight loss? Does it have healthy ingredients? This Glucerna review will help you determine if it’s truly an effective meal replacement.

Glucerna Ingredients and Side Effects

“maltodextrin promoted the growth of unhealthy bacteria, which damaged the intestine and increased the risk for inflammatory disease”

When unhealthy bacteria grow, this can lead to a damaged immune system, as well as several other health problems.

It may also promote other side effects such as:

Though this shake is meant to be a low-glycemic shake, this ingredient is known to severely raise blood sugar. Since it’s listed first in the ingredient listing, this means most of this shake is made up of corn maltodextrin.

The FDA requires companies to list ingredients that make up most of a food in descending order. So most of this shake is made up of this processed cheap corn sugar.

Fructose: Simple sugar extracted from fruit. Multiple clinical studies have shown this ingredient to be harmful to overall health. The University of California, Davis, did one such study, they found that fructose:

It showed an increase in the risk for long lasting weight gain. There were also other noted effects from the same study:

“potential to exacerbate the components of the insulin resistance syndrome”

Fructose is considered a bad choice for sweetening. It can also cause blood sugar problems, and it may lead to diabetes.

Due to its many potential problems, it’s often advised to avoid this sugar as much as possible. Sugar has no nutritional value, and in this form it may promote unwanted side effects.

Soy Protein Isolate: A defatted soybean extract that provides around 90% protein by volume.

Soy is often GMO unless otherwise stated, and it can potentially provide estrogen compounds, phytates and goitrogens.

The Nestlé Research Center found that this ingredient had detectable levels of phytates:

Phytates are known to reduce mineral intake, so it can potentially cause nutritional deficiencies. This may not only stall many important body functions, but it can lead to serious health problems.

Harvard also confirmed the possibility for soy to create increases in estrogen:

This is due to the phytoestrogens, which can cause increase in the hormone estrogen. This can lead to an increased risk for cancer, as well as harm to both men and women through hormone manipulation.

Studies into this ingredients safety have shown it to be potentially bad for overall health. One study by the International Weekly Journal of Science called Nature, found that this ingredient:

Mice given this ingredient had a likelihood of being obese. Since it can cause metabolism disorders, it may also create many other associated health problems.

A study by the Naylor Dana Institute for Disease Prevention found that this ingredient:

When given to these rats, there was an increase in tumors. Another study published in the Cancer Letters also found the same side effect. There has been concern from a few studies that it may be a cancer-causing ingredient.

Acesulfame Potassium: Calorie free artificial sweetener that has had controversy over its potential health risks.

A study published by PLOS One saw that this ingredient had effects that ranged from:

In this study, it was found to not reduce hunger, while affecting blood sugar negatively. It could have a negative brain effect that might effect the possibility for weight loss.

Sucralose: Non-caloric artificial sweetener that can be around 1,000 times sweeter than sucrose.

Several studies have shown side effects from this ingredient. The Washington University School of Medicine performed one such study:

So this ingredient could affect metabolism, and it raised the blood sugar in rats. Though artificial sweeteners are meant to stabilize blood sugar, studies confirmed it had the opposite effect. This meal replacement is meant to help stabilize blood sugar levels. Though many of its ingredients have shown the opposite effect. Corn maltodextrin, fructose, sucralose, acesulfame potassium, and carrageenan have all shown the possibility to cause metabolism, and blood sugar disorder.

Also, there’s a high amount of potentially dangerous artificial ingredients added. Some of which have clinical studies showing they promote weight gain.

There’s a high mount of calories added at 190 per serving.  All these issues might make one actually likely to be obese.

The Price and Quality of Glucerna

It’s claimed that this is the number #1 doctor recommended brand, but they fail to cite any proof of this claim. Considering how many studies have shown several of these ingredients to be potentially harmful to blood sugar levels, it wouldn’t make sense that this would be a recommended brand.

Abbott Laboratories owns this brand, and they can be reached via the following:

The company is a global group that makes healthcare products.

They had to settle a over $500 million dollar settlement due to illegal marketing. This was the 2nd largest settlement from a US drug company.

Several reviews are available online. Here’s what a few customers have experienced:

“tasted like cold cardboard and leaves a horrible aftertaste”

People often mentioned that the taste was much too sweet, and that when they tracked their blood sugar levels, they noticed a spike increase.

There were also some people who experienced digestive related side effects.

Many were concerned with how artificial it tasted, and the lack of weight loss or blood sugar control benefits.

How Does Glucerna Compare?

When looking for a meal replacement, it’s important to look at a the science of how a brand works. In Glucerna there’s a high amount of artificial ingredients, and most of what this shake is made up of is processed corn. Customers have also considered it much too sweet, and not beneficial for what it’s marketed towards, which is to help with blood sugar.

Meal replacement shakes that offer high quality protein, all natural ingredients, no added fillers, and that are user favorites are available. The very best option out of 2023 that meets all this criteria is 18Shake.

Not only is this meal replacement made with GMO free whey protein, but also it contains just 1 gram of sugar, 5 grams of fiber, and just 90 calories. It’s the reason why customers mention it’s effective for real weight loss results. You can read these glowing customer testimonials on their official website. People also highly rate the taste, ease of mixing, and appetite suppression.

18Shake is offered with a solid 30-day money back guarantee. So you can try this shake risk free.

One Response to Glucerna Review

Clayton hate it, this company pill is poor! Clayton had a bad response to this pill with problems in stomach and had a problem getting a refund.Under no circumstances drink anything unless your medico prescribe it!