Nutrilite Review: Does it Work? 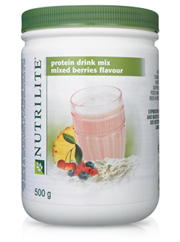 Nutrilite shake is a meal replacement said to be made using the latest soy technology processing, for an easy to mix, instant beverage. It’s made with 8 grams of protein, and it’s offered in chocolate, mixed berry, and green tea.

You can mix this shake with water without having to use a blender. It’s claimed to be a great tasting, preservative, artificial color, and artificial flavor free meal. There’s not much information provided by the manufacturers, and they fail to provide an ingredients list or nutrition facts label. Though in researching this brand, there was a listing of what’s inside. So is this truly a effective and good tasting shake? What kinds of results are possible? This Nutrilite review has all the information needed to make a informed decision.

Nutrilite Ingredients and Side Effects

Here are the ingredients to their Mixed Berry flavor:

Isolated Soy Protein: Defatted soybean that has around 90% protein by weight. This ingredient has had many studies showing its potential side effects.

It’s often GMO, due to soybeans being one of the most GMO crops available.  There are fears that this process may make it harmful to eat.

One clinical study by the National Center for Toxicological Research found:

Goitrogens are known to cause damage to the thyroid. This can lead to several unwanted side effects that include:

The same study showed a estrogenic effect. This can be damaging to both men and women. It may increase the risk for breast cancer, as well as cause hormone imbalances.

“can behave like endocrine disruptors, with the potential for adverse effect”

“have been case reports…. Abnormal uterine bleeding that subsided on ceasing their intake of phytoestrogens”

This ingredient was shown to no longer cause issues in people who stopped taking it. There have been numerous studies showing that soy may increase estrogen, cause metabolism disorders, damage the thyroid, as well as several other problems.

A study by the Pennington Biomedical Research Center found that fructose:

In its processed form, it loses any trace vitamins and minerals. The same study showed it to have a

There were also other concerns with increasing the risk for obesity:”

It didn’t help with controlling blood sugar and hunger satiety. Leptin is a satiety hormone that helps the body know that it’s no longer hunger. So you can eat a large amount of fructose, and not feel satisfied. The same study also found that it:

“did not suppress circulating ghrelin”

Ghrelin is a appetite-stimulating hormone. So this ingredient could lead to weight gain and metabolism disorders. When added to foods, it may cause one to not feel satiated, and to overeat. This  effect in the long term may eventually lead to obesity.

Nonfat Dry Milk: Dehydrated form of milk that is processed to help it stay preserved for longer.

A major incidence happened in 2022 where this ingredient was found to be contaminated with melamine. Over 300,000 people had problems such as kidney stones and other forms of kidney damage.

Because of it often being imported in from different countries, there’s a possibility for contaminations.

Due to its high lactose content, it may produce allergic reactions and flatulence in some. Though there’s no added artificial flavors or colors, they do add processed ingredients. There’s also a lack of information about the ingredient strength for most of what’s inside. There’s no way to find out how much sugar is added. Though the sugar does come from a potentially harmful additive in fructose.

There’s 8 grams of protein that come from cheap milk proteins and GMO soy. These ingredients can be found elsewhere for much cheaper.  Though soy is not recommended, due to the numerous clinical studies showing it to be potentially harmful to overall health. It has also been shown to potentially lead to weight gain and reduced mineral absorption.

Since there’s GMO soy protein added,  it may have multiple damaging effect. Many studies have shown is potentially dangerous due to its potential estrogenic, goitrogenic, and metabolism disrupting effects.

The Price and Quality of Nutrilite

One seller provides a 15-ounce container for $37.66. Though it’s unknown how many servings are in this shake, or it’s sold at a good price.

Due to the lack of information about most of the ingredient strength, no company listed ingredients ,and a mixture of cheap ingredients, this shake rates poorly. It’s impossible to truly determine what kind of an effect it may have in comparing dosage strength. Though the ingredients added are cheap and processed.

This shake has numerous additives that may be potentially harmful, as well as possibly increasing the risk for obesity.

Amway sells this shake and they are a multilevel marketing company, you can reach them below:

The company has been rated poorly in terms of customer service. Their Better Business Bureau page has a total of 12 complaints for the following:

“refused to help or handle the situation”

“gave me the wrong products and took extra money”

Many felt the company was not responsive in handling complaints, and there were problems with a lack of communication.

There were a few people who wee told they would have their issues corrected, only to be continued to be charged and ignored.

Another lawsuit worth $112 million for alleged fraud was settled. There were also complaints of the company operating a pyramid scheme.

There are a few customer reviews listed online:

“Taste is not good”

“Doesn’t work good on your muscle”

“Not mixed well in milk”

When reviewing this brand it can be difficult to figure out who are real customers, and which are salesmen looking to make the product seem better than it actually is. This is due to the companies multilevel marketing strategy, which means anyone can begin selling this brand. Often people will make it seem much better than it actually is, in order to make more sales.

The few reliable reviews mention how it doesn’t mix well, that it has a bad taste, and that it had no effect on weight loss. People had trouble balancing the right texture as well. For many, there was a lack of proper mixing.

How Does Nutrilite Compare?

When considering Nutrilite, it’s important to look at what the company offers, as well as what kinds of ingredients are added. The company never provides any information as to what’s inside, and what the total strength is of each ingredient.

What’s included is a potential weight-increasing ingredient in fructose, and GMO soy. It’s important to be aware of what’s truly added, which is impossible, only other customer have uploaded images as to the ingredients added. This makes it impossible to know if it’s up to date, or what the total strength is of each ingredient.

When using a meal replacement, it’s important to look for all natural ingredients, non-GMO additives, and a full nutrition facts label. The very best 2022 meal replacement that offers all this, is called 18Shake.

This shake has a high amount of vitamins and minerals, only high quality whey protein at 15 grams, and just one gram of sugar from stevia. Its all-natural formula has been shown to help with appetite suppression, and customers mention it’s possible to lose a lot of weight with this shake. They also say it mixes well, tastes great, and is filling enough to replace a full meal.

18Shake has a  full 30-day money back guarantee, so you can use this shake without a fear of losing money. It’s one of the many reasons customers continue to use this meal replacement.