Quest Protein Review: Does it Work? 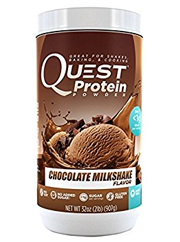 Quest Protein is a protein rich powder that is offered in multiple flavors and sizes.  It provides a low calorie to high protein ratio, and they advise it for post-workout recovery.

They also add that this is a low carbohydrate and high protein shake which can prevent one from overeating unnecessary carbohydrates. Full nutrition facts are provided and the company uses a low glycemic, 0 gram sugar replacement in stevia and sucralose.  After much review our experts found that 18Shake was the most beneficial shake for weight loss. It contains a rich blend of whey protein with low calories, it’s described as being easy to mix, and users have said it offers a satisfying meal which can suppress appetite. Read about the benefits 18Shake can provide for sustained weight loss by clicking on this link.

Quest Protein Ingredients and Side Effects

Ingredients can vary slightly but the additives in their vanilla milkshake flavor include:

Whey Protein Isolate: A byproduct of the cheese making process which produces a protein rich, easy to digest nutrient. The isolate version of this is often free of any fat, cholesterol, and lactose.

This isolation process also makes it a minimum of 90% protein, which provides a rich source of healthy protein.

Micellar Casein: Casein is one of the most common sources of protein found in milk. This is a slow releasing protein which can provide a steady amount of amino acids up to 12 hours.

This can also lead to a long lasting sensation of fullness as it stays in the gut. Cellulose Gum: Common thickener which is added to keep the other additives in this formula stable. This can be taken from the cells walls of plants. This can be found in things like paint, detergent, paper products, laxatives, and much more.

Sunflower Lecithin: Fatty substance that is taken from the processing of sunflower. This is often unlikely to cause any side effects in people, though it can provide a source of phytoestrogens, which some claim can lead to estrogenic like disorders within the thyroid.

Carrageenan: An extract from algae or seaweed which provides thickening properties. This can also be used as a laxative.

It is said to be safe to use in controlled amounts however.

Sucralose: Synthetic sweetener that is much sweeter by weight than standard table sugar. While some studies have shown it is safe, a study by North Carolina State University found that it:

This effect over time can lead to inflammation and even possibly raise the risk for serious disease.

Click here to learn about the most beneficial weight loss meal replacements as reviewed by our experts. Within Quest Protein Powder are some healthy ingredients such as stevia, which is a great alternative sweetener which does not raise blood sugar levels. They also add a high amount of protein, some of which comes from whey protein isolate.

The issue lies with the use of carrageenan, a potentially unstable binder and the added sucralose which some studies show can be dangerous over time.

It’s also a good sign that they use low carbohydrates and low calories, but the fiber content is also extremely low at less than 1 gram per serving. This may be why the company does not market this as a meal replacement shake. The vitamin and mineral content is also low, which cannot satisfy the replacement of a full meal.

For a closer inspection of the top 10 meal replacement shakes reviewed this year; simply follow this provided link. The Price and Quality of Quest Protein

Quest Protein Powder provides multiple options for serving sizes on their official website. A 2lb canister sells for $39.99, which provides a total of 32 servings.

It is good that the company says you can even mix this with water, as it ensures one is able to take in less calories, as well as able to prep this with ease.

The price is fairly standard as far as most shakes go, but this does not qualify as a meal replacement due to the low amounts of vitamins, minerals, and fiber. It may not be filling enough and might serve better as a snack as opposed to a full meal.

Usually meal replacement shakes offer a wide array of vitamins and minerals need to help satisfy what one would gain from an actual meal. This is far too limited to ensure it would be useful enough.

Overall Quest Protein Powder is somewhat limited in comparison to actual meal replacement shakes. While it is good that they added some rich protein and one form of a stable sweetener, not all the ingredients are considered likely safe.

The company name is Quest Nutrition LLC, and to contact them you can use the following:

They do provide their hours of operation, and they claim to have a 72 hour estimated response time for emails.

A money back return is offered within 60 days of the purchase date, but this must come with proof that it was purchased direct from them.

In 2022 the FDA sent them a notice that after reviewing the company, there were false claims made about their health and nutrient content. The company responded back by saying that their food was indeed healthy, but it’s unknown if they had to still change their marketing.

Other than this one issue it does not appear the company has had any sort of problems. The link here will redirect you to the experts list of the top ranking meal replacement shakes of the year.

The following are some select reviews on Quest Protein Powder:

“way too foamy and thick this made it very difficult to try and drink it, it just won’t blend very well”

“The flavor made it hard to drink because it’s too darn sweet. It might be good for baking though”

Most of the positive reviews had to do with the fact that people liked the taste of it, as many said it had a dessert like flavor profile. Not all enjoyed this however, as some said it was far too sweet, and that it made it too rich to drink.

Mixing was an issue for some as well, as it often did not mix well in a blender as it was far too thick for some.

Rarely did anyone mention whether or not they were able to lose weight, so it’s difficult to determine if this is a likely outcome.

Another issue is that many who took it thinking it was going to be good for blood sugar had the opposite effect, as for some it actually raised their blood sugar levels. It’s not known what could have caused this effect however, and it was an issue for those who thought it would be diabetic friendly.

To read about the top meal replacement shakes which are available now, click here.

How Does Quest Protein Compare?

Quest Protein Powder is often described by users as a frothy, decadently sweet shake. Some may like taking this as it is, but there have been some complaints of it being too rich and like a dessert. The nutritional yield is also fairly low, which is likely why the creators don’t market this as a meal replacement shake. The price is fairly decent but they also added some questionable additives like the artificial sweetener sucralose.  Overall this cannot be regarded as a meal replacement shake, and the overall nutritional yield is clearly lacking.

The most well regarded out of all meal replacement shakes for weight loss was 18Shake. It offers a low calorie, high protein, high fiber, and all-natural formula which can suppress appetite for hours.  No added artificial ingredients, stimulants, colors, preservatives, or any kind of cheap additives are used which are not needed.

People remarked on how it made them able to resist junk food and keep their diet on track. You can read multiple positive testimonials on their official website from people who were able to sustain their weight loss results, and also lose plenty of weight. Learn about the benefits 18Shake has already provided other users by following this cited link.