Vega One Review: Does it Work? 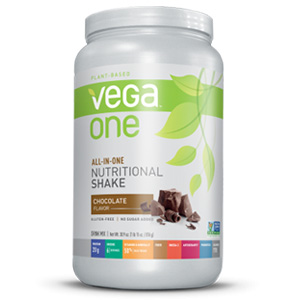 Vega One shake is a meal replacement made from whole foods and plant-based protein alongside antioxidants and probiotics. The brand promises to provide “everything you need, all in once delicious scoop”

There’s many organic ingredients added, and this brand is marketed as being a wholesome and nutritional gluten free shake. They claim that by adding more plant-based nutrition, you’ll be able to potentially reduce the possibility of chronic diseases. Is this meal replacement truly a good choice? What kinds of weight loss benefits are possible, if any? In this Vega one review you’ll learn everything you need to know to make a decision.

Vega One Ingredients and Side Effects

Here are the ingredients to their French vanilla flavor:

Pea Protein: Made from pea legumes, this ingredient is often used as a non-GMO and estrogen free alternative to soy protein. This is due to its cheap price and digestibility.

It’s low in the amino acids cysteine and methionine. This is why it’s often mixed with other sources of protein. By itself it’s incomplete and would not be satisfying enough to give the body what it needs.

This can increase the risk for the arthritic pain known as gout.

Hemp Protein: This protein source has all the amino acids, and it’s often high in protein and fiber. Though it’s low in the amino acids Lysine and Leucine, both of which are important amino acids.

“not yet linked to unique health benefits”

So there’s no added benefit to using this protein over other kinds.

Chlorella Vulgaris: A form of green algae that is used due to its protein and minerals. Though it can potentially lead to many side effects such as:

It’s also not advised to use this ingredient if one has a weak immune system. This is because it can be taxing on the body.

There’s criticism over the use of this ingredient. Depending on where it’s sourced from, it can be extracted from polluted waters. This can increase the risk or contamination from thins like lead or other heavy minerals.

Stevia Extract: All natural plant sweetener that has no calories. It’s around 200 times sweeter than sugar, and can be used as an effective substitute to traditional sweeteners.

Not much is needed to sweeten foods, and it’s often used as a way to control blood sugar when sugar is needed in foods.

Organic Acacia Gum: Thickener and fiber source extracted from the acacia tree. Possible side effects include:

Drugs.com also mentions that this ingredient may cause:

Though organic, it’s still possible for this ingredient to cause unwanted side effects. It’s also a cheap fiber source that’s not as nutritious as other fiber ingredients.

Vega One Quality Of Ingredients Plant based protein is flawed because it often does not have enough amino acids on its own. This is why this brand features a blend of different protein strains from sancha inchi, pea, and hemp protein.

It also has ingredients like chlorella vulgaris and organic acacia gum which are both known to potentially cause side effects. This can include intestinal distress, gas, bloating, nausea, and many other symptoms.

A benefit to this shake is the use of stevia, which is a low glycemic alternative sweetener. It also has a high amount of protein. Overall however, the brand has a lot of unnecessary and potentially dangerous ingredients.

The Price and Quality of Vega One

One 20 serving jug sells for $69.99. This makes it one of the priciest meal replacements on the market. It’s likely due to the organic ingredients as well as the marketing.

Though the amount of protein added is a full 20 grams, it all comes from less than quality sources. They also fail to mention what the total amino acid content is, so it’s impossible to determine if the protein is quality. Low amino acid profiles would not be beneficial when you’re looking to replace meals.

Due to the low amino acid found in the kinds of protein used, its unknown if this would satisfy as a proper meal replacement.

It’s good that there are many organic ingredients and the sugar level is low, but overall, the kinds of ingredients used aren’t the best. A full meal replacement should be full of nutritious ingredients. This brand fails to provide enough of this to be a well-rounded shake.

Business of Vega One

The manufacturers are also called Vega, and they can be reached via the following:

The company does offer returns within 30 days, but only on unexpired products.

Not much information exists about how the company deals with their clients.

There have been company recalls as well that you can read about on the official FDA website:

The Vega One shake recall was claimed to be precautionary due to the low amounts. However, any amounts of ingredients like antibiotics are a red flag about the companies manufacturing problems.

It’s unknown why this was ever allowed. Antibiotics in foods are strange to have as a contamination. For certain people this could have been a serious issue. There’s no information on whether or not anyone was harmed.

Customer Opinions of Vega One

Many reviews  are available for this product. Here’s what some customers had to say on Amazon.com:

“Unfortunately this product is unusable”

Many people experienced very serious side effects. There was also much criticism over the taste. Customers often stated how they found it undrinkable, and that there was a lack of weight loss benefits.

Plant based protein shakes are often not well reviewed in terms of taste. There were a few customers who felt as though the old version of this product was better. Many claim that the company now makes an inferior product, and that they reduced the overall nutritional yield.

How Does Vega One Compare?

Conclusion – Does Vega One Work?

Vega One might have caught your attention since it’s available in many stores. It’s a blend of several organic ingredients that makes it sound impressive. Also, it does have a high amount of protein. However, this shake also suffers from many negative customer reviews, a plant based protein blend which isn’t as rich in amino acids as other proteins, and there’s ingredients which may cause side effects like the ones suffered by many customers.

When searching for an effective meal replacement, it’s important to seek out products that are backed by real research. What are needed are ingredients that have been shown to be not just effective for weight loss, but also free of any alarming side effects. The right brand should ideally have quality amino acid rich protein, no added thickeners or stabilizers, and a whole host of all natural ingredients for weight loss.

Of all the meal replacements coming out, the 2022 best choice was 18Shake.

Not only is this shake full of quality whey protein, but also it contains a high amount of amino acids to ensure lean muscle growth and a healthy body. This brand also has only all natural ingredients without any unnecessary thickeners. Customers agree, it has a great taste and it’s effective for appetite suppression.

When reviewing all the meal replacements out, only 18Shake surpassed all the criteria for taste, nutrition ,and weight loss benefits. This is likely why the owners offer a solid money back guarantee that’s offered with no questions asked.